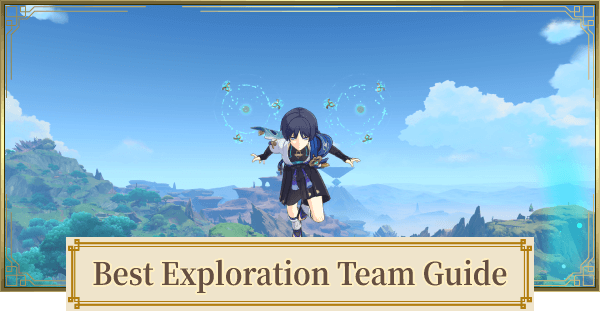 Great For Exploring The Open World

In this guide, you can see various characters that are great for exploring the open world. Each character in the team has a specific role for exploration. Build an exploration team based on the available characters in your roster.

Why Is General Exploration Team The Best?

Wanderer's Skill enables him to float for a brief period. It does not consume stamina since the Skill has its own "stamina" gauge.

When holding the Skill of Yelan & Sayu, the movement speed is temporarily boosted. It does not consume stamina which is great to use whenever available to conserve stamina. In addition, Sayu enables Anemo resonance with Wanderer which is helpful for exploration.

Zhongli As A Support

As a Geo character, Zhongli can easily break multiple ores. Holding Skill conjures a shield that protects the active character while reducing the elemental & physical resistance of nearby enemies and a monolith that can give a buff if Tenacity of the Millelith x4 is used. Burst can petrify the enemies for a short period which is helpful in combat.

Why Is Free-To-Play Exploration Team Good?

Razor can deal heavy physical damage to enemies. As a claymore user, he can easily break multiple ores. He can also decrease stamina consumption while sprinting.

Amber is useful in combat, especially when hitting the weak points of Ruin enemies. As a bow user & Pyro character, she can apply Pyro from afar which is required to solve some gimmicks & puzzles. She can also decrease stamina consumption while gliding.

Sucrose has great crowd control that can be convenient when fighting against hordes of lightweight enemies. Her Burst can also compress the drops of defeated enemies.

Besides restoring HP, Barbara's Skill can decrease the stamina consumption of the active character by 12% throughout the duration. In addition, she can provide a buff to the next character if Thrilling Tales is used.

The listed characters are helpful for convenient exploration. Some can conserve stamina while sprinting, gliding, climbing, & swimming while others have fast mobility that does not consume stamina at all.

Some characters can briefly boost their movement which is great to use in turns with regular movement that requires stamina.

Abilities with fast mobility are also useful in combat.

Alternate sprint is also useful for traversing bodies of water and the speed is the same as doing it on land.

Some characters can displace themselves quickly which is useful for exploration.

Some characters can create Geo construct that can be used as a platform to gain altitude. Geo construct can also be used to some gimmicks & puzzles such as pressure plate.

The characters listed below have great crowd control that can compress lightweight enemies altogether.

Besides lightweight enemies, some crowd control can also affect the drops from defeated enemies.

The listed characters above are powerful that can damage & clear many enemies at once. Include them in your team if you plan to farm for ascension materials from enemies in the open world.

The listed characters are helpful for gathering useful resources in the open world. Include them in your team if you plan to hoard specialties & stockpile resources for cooking & Serenitea Pot.

By holding the Skill of Razor & Zhongli, you can break many ores in an area all at once. Razor can also break ores with Normal Attack since he is a claymore user.

Use Sayu When Farming Crystalflies

Sayu's passive talent enables you to approach crystalflies without startling it. The crystalflies would only fly away the moment you start to gather.

Use Nahida For Convenience

Nahida's Skill enables you to get resources from a distance and you can only get up to 5 resources per Skill cast.

Different characters are useful depending on the gimmicks & puzzles like elemental monuments.

Use Claymore Or Geo Character

Pyro is needed when encountering it during exploration. It is recommended to use bow users so you can trigger it even from a distance.