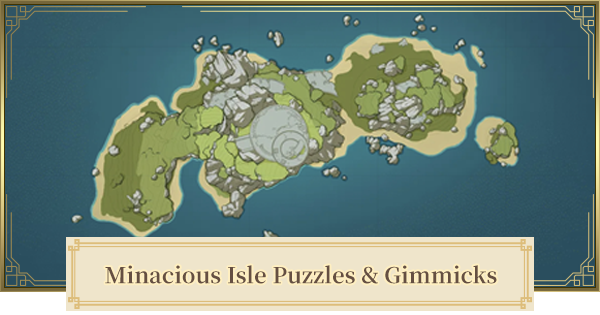 Minacious Island is located at the South part of the Golden Apple Archipelago, and it has two island layout. It can be changed by using the mechanism called "Place in Water".

This island is also related to Mona's mirage that can be played as a limited-time event called Summertime Odyssey.

The whole area of Golden Apple Archipelago has 2 map layouts. You can change the map layout by using this Place in Water mechanism. There are different gimmicks and puzzles on every map, you can always use this if you are searching and completing a certain quest.

Elemental monuments that exist both in island layout 1 or 2, regardless of the island, can be activated according to their elements. Some of them have some patterns or chronological order to activate & solve the puzzles.

How To Solve Element Monument Gimmick 1

If the warp hole in the sky does not appear, please try the same procedure in the Island 2.

How To Solve Element Monument Gimmick 2

How To Solve Element Monument Gimmick 3

How To Solve The Constellation Gimmick

How To Solve Torch Puzzle

Hot To Solve The Torch Inside The Room

You will encounter this room upon doing the Thus Was the Work Done in Vain Quest. Light up all the flame torches in order to unlock the gate.

Solve The Upside Down Torch

The upside down torch can't be lighten up, however remember the lit torches and unlit torches as it will be the hint for the other flame torch puzzle that is located on the Minacious Island 2 (refer on the table below).

How To Solve Wall Carving Puzzle

The characters carved on the wall of the ruins in the Island 2 that can be activated or deactivated upon touching. There is a hint on the wall on the Island 1, use it in order to solve the puzzle and obtain a treasure chest.

Wall Carvings At The Second Island

Collect 8 Starlight Coalescence and place it on the designated location to unlock and obtain 3 luxurious chest.

Starlight Coalescence Locations & How To Get

You must clear the Like Rhyme And Song, The Summer Reverie in order to trigger the 2 limited-time world quests.

Thus Was the Work Done in Vain Quest

Thus Was the Work Done in Vain Quest Guide