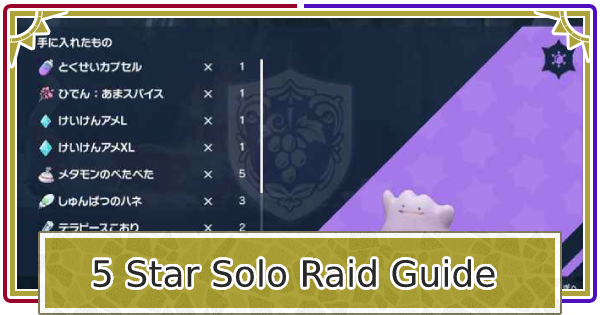 5 Star Raid Unlocked After The Ending

The 5 Star Raid is automatically unlocked after completing all three storylines and finished watching the Ending. Make sure to finish the storylines first if you have not yet completed it.

The Recommended Level For Solo Raid Is Lv 80 To 100

The recommended level for the 5 star Raid is 80-100, which will make it easier for you to attack. In addition, if you want to take on the 6 Star Raid, Lv 100 is normal and you will need a Raid Pokemon for each type of Raid type, so you should start preparing now.

Is There A Way To Recognize A 5 Star Raid?

There is NO way to identify a 5 Star Raid on the map. You need to go to the Raid location to see if it is a 5 Star Raid.

Koraidon And Miraidon For Raids

Increase your Attack with Swords Dance and then use Drain Punch to attack. If you spend too much time preparing, the Boss Pokemon will protect itself from your attacks with Screens so it is recommended not to be too aggressive until you get to use Screech.

How To Train Koraidon For Raid

Metal Sound combined with Throat Spray is a powerful move to increase your Sp. Attack while lowering the opponent's Sp. Defense. Use Parabolic Charge to attack everything around your Pokemon while restoring its HP by half the damage to opponents taken by those hit.

How To Train Miraidon For Raid

Use Safety Goggles To Protect Against Spores

Some Raid bosses have Pokemon that can inflict status move like Spore. It will be difficult to clear a 5★ Star Raid if your Pokemon is often induced to sleep, so make sure to equip them with Safety Goggles to counter its effects.

Use Taunt Or Yawn

Similar to Spore, Raid Pokemon that use Yawn lulls the target into falling asleep on the next turn. The effects of Yawn may not be prevented by Safety Goggles alone, so make sure to use Taunt to prevent your opponents from using this move.

Some of the rewards available after winning the 5★ Raid differs depending on the Boss Pokemon. You can get and based on your level, making it easier to acquire items.

Rewards For Each Pokemon