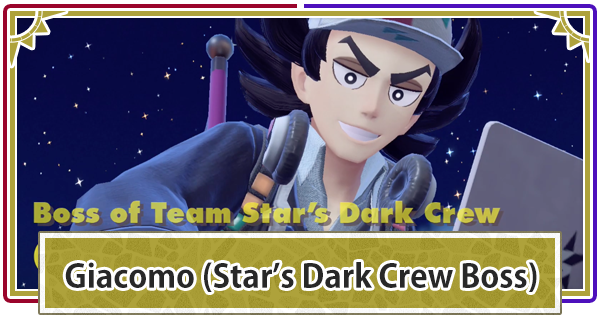 Giacomo's Pokemon In The First Battle

All of Giacomo's Pokemon are Dark-type, and if you choose a Fighting-type pokemon, you can easily tank their DMG because Fighting is strong against Dark and Fighting moves get supper effective. Get an advantage in the battle by using Fighting Type.

The Starmobile (Revavroom) has a high HP, and has the ability Intimidate that lowers ATK, so you can either cancel it by changing Pokemon or attack it with a Special move. Be aware that it can put your Pokemon to sleep by using its Dark Accelerator.

Dark Crew Base is located at the southwest if Cascarrafa. From West Province Area 1 Pokemon Center, head to the east to get to the area.

To unlock the base, you must first fight the Grunts who are guarding the gate. It will be an easy 1 vs 1 battle.

After defeating the Grunts, examine the gate to start the "Star Barrage" with the first 3 Pokemon in your team.

After entering the base, you need to defeat 30 Pokemon using Autobattle. During this phase, you can use Let's Go to maximum 3 Pokemon.

Talk To Clive Or Vending Machies To Heal

You can talk to Clive or interact with Vending Machines set in the Base to heal your Pokemon. Make sure you use it frequently to avoid making your Pokemon faint.

Once you succeeded defeating 30 Pokemon within 10 mins, you will be able to battle Giacomo. Once you defeat Giacomo, it will be the end of the challenge.