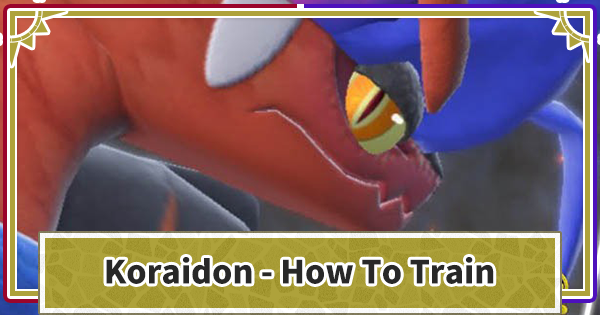 How to train Koraidon Build For Raid Guide in Pokemon Scarlet and Violet (Pokemon SV). See how to train Collision Course, Effort Values, recommended skills and what to bring.

Fighting Physical Attacker That Can Weaken The Opponents

Koraidon is a Pokemon with high Base Stats in both Attack and Durability. Screech lowers the enemy's defense by two levels, allowing it to use the high firepower to its advantage. And recovering with Drain Punch to avoid being fainted is also one of its strengths.

After using Screech, dealing damage by Drain Punch with the Same-type attack bonus repeatedly, makes it useful in the Tera Raids which are weak to Fighting type. On the other hand, it is not recommended to bring it to Raids where Fighting attacks will be halved or disabled.

How To Train Koraidon

At post-game, you can get the second Koraidon at Area Zero. Also, since Individual Value & Nature are both fixed, so you do not need to reroll to do any selecting.

How To Train Koraidon?

The time limit in Raids is crucial so dying is not good since respawning consumes time. It is recommended to prioritize HP over Speed. Raise 252 for both HP & Attack. Meanwhile, Defense & Special Defense increase on their own so it is ok if you focus on other stats.

If you have enough money, the fastest way to raise the Effort Value is to buy Vitamins from shops although it costs a total of $ 500,000 so do this according to your preference.

Vitamins are available from Chansey Supply while Feathers can be obtained from the subtle glitters at Casseroya Lake.

Get Money From Winning Battles

You can raise the Effort Value of a Pokemon by 1-3 when you catch or defeat a wild Pokemon. Meanwhile, you can increase it by 8 by using a Power Item which costs $ 10,000 a piece so it is recommended to buy this if you have money to spend.

Please click the image to enlarge it and see the location.

Please click the image to enlarge it and see the location.

You can get Exp. Candy by clearing 5-6★ Tera Raids. Raising the Lv of a Pokemon to the highest is great if you are focusing on your Pokemon Team one by one.

If you do not have enough candies to raise a Pokemon to Lv 100, it is recommended to hunt for Chansey at North Province Area Three until you get sufficient candies.

Use the Bottle Cap to raise Individual Value of a Pokemon, such as HP, DEF, & SP. DEF, to the maximum. You can buy Bottle Caps from the NPC near the Pokemon Center of Montenevera.

Where To Buy Bottle Cap

Best Moves To Get For Koraidon

During Raids, it is important to not get debuffed or faint. Therefore, Screech & Drain Punch are must-have moves while Collision Course can be used depending on the situation.

How To Use Koraidon In Raids

Punching Gloves can increase the power of Drain Punch while Life Orb increases the power of all techniques by 1.3 times.

It can lower the DEF of a Pokemon. If ever one of your allies used Screech, you can use Swords Dance instead for damage buff.

If you are facing a Pokemon that is weak against Collision Course, use it repeatedly. Meanwhile, if the enemy is resistant, use it first and take the damage then use Drain Punch repeatedly until it faints.

Use Cheer Depending On The Status Of Your Allies

If one of your allies faints, the time gets shortened whenever you use Cheer. Use Heal Up as much as possible.

After EV training Koraidon, I found that it's 6 EVS in Sp. Def to max everything, unless the other 2 EVs go into another stat.