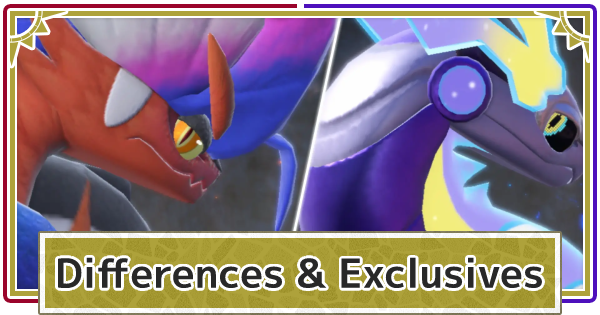 Find out the differences & exclusives between Pokemon Scarlet & Violet (PokemonSV). Guide includes which version is better, which one to buy, Pokemon exclusives, and different content!

Other Differences Between Pokemon Scarlet & Violet

Professor Sada appears in Pokemon Scarlet and Professor Turo will be in Violet. Both are researching a certain tradition in the Paldea region.

In Pokemon Scarlet and Violet, you will go to the Academy as part of the story. The Academy you attend will depend on the version that you have. However, the only difference really are the Academy's name, emblem, and their uniforms.

Which One Should You Buy?

Purchase Any Copy That You Want

In the previous titles, the storyline remains largely the same regardless of which one you choose. You can simply base this on the Pokemon exclusives, and which one appeals to you more.

Recommended To Buy The Double Pack

If you are not sure which version to buy, you can also buy both of them. If you purchase the double pack, you will also get 100 Poke Balls as an exclusive bonus.

In a twitter survey conducted, Violet seemed to be the more popular version of the game. Even those who purchased the double pack were seen to choose Violet as their main game. Many people deemed this as due to the visuals of the Legendary Pokemon!