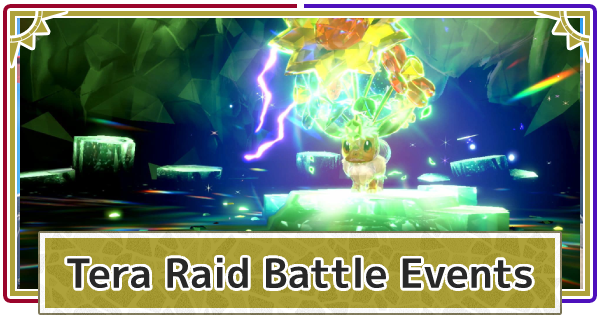 What Is A Tera Raid Battle?

Tera Type Pokemon can be caught during Tera Raid Battles which are more powerful than usual. Engage in a co-op battle with 4 other players and work together to weaken the unique Pokemon for a chance to capture it within the time limit!

If you want to play Tera Raid Battles with other players online, you need to subscribe to Nintendo Switch Online which is a separate paid subscription.

※ This link will take you to the official Nintendo Switch Online website.

The original & Tera type is similar but the Pokemon that appears in Tera Raid has a Tera type that is different from usual. You can choose to catch the Tera-type Pokemon or not. You can also select the Pokeball of preference so make sure to prepare the ball you want.

You can get a lot of rewards such as EXP Candy & Mushroom from winning Tera Raid Battles. In addition, you can get Tera Shards that can be used to change a Pokemon's Tera Type. You can get better rewards from higher number of Tera Raid stars.

How To Do Tera Raid Battles

Initiate Tera Raid Battle by interacting with the glowing crystals that can be found in different areas. The color of the crystal determines the Tera Type of the Pokemon inside.

The crystal locations are changing randomly when the date has been changed so it is recommended to look for the Tera Type icon on the map.

Head Close To The Crystal And Press A

Head to the Crystal and press A to start a Tera Raid Battle. You can select whether you will play Solo or with a team. Selecting Solo will put NPC with you.

Remember To Use The Right Pokemon

You can only use 1 Pokemon when participating in Tera Raid and you cannot change it during battle. Your top Pokemon gets selected every time so do not forget to replace it whenever you do Tera Raid.

Have At Least One High-Level Pokemon

During Tera Raid battles, even without enough badge, the Pokemon will follow your commands. To make Tera Raid Battles easier, it is recommended to catch a high-level Pokemon in possession. If you do not have one, catching one in the wild can be done.

Exploit The Weakness Of Tera Type

The Pokemon in Tera Raid Battle appears is Terastallize state from the start. Therefore, fight it with type of Pokemon which can exploit the weakness of Tera type. However, the moves the enemy Pokemon use have nothing to do with Tera type so avoid using Pokemon that might be weak to the original type of the Pokemon.

If you attack 3 times, you can use Terastallize which greatly boosts your Pokemon thus always use it when possible. However, transforming consumes time so take note of the time limit and be careful of time out.

You can cheer instead of using your Pokemon to attack. Cheer can be done 3 times at max during Raid Battles which can affect all allied Pokemon in the field.

Fainted Pokemon Can Be Revived

Even if your Pokemon's HP is reduced to zero during a raid, you can revive it and rejoin the battle. But remember that the time required for reviving gradually becomes longer each time it is done which can consume a significant amount of time.