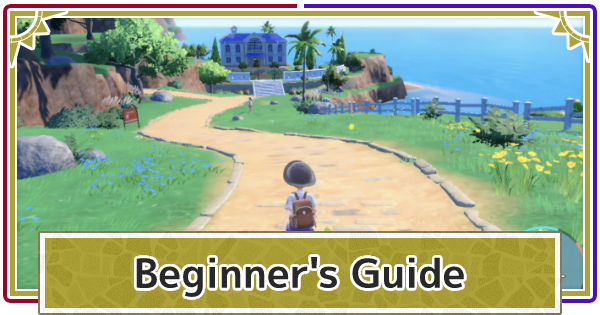 The beginner's guide in Pokemon Scarlet and Violet (Pokemon SV). Includes the tips for starting, things to do in the early stage, and explanations of new features.

How To Progress The Game

From the start of the game to the end of the event at the school in Mesagoza, follow the in-game directions without branching. After that, you will be able to progress the story as you like.

Reset The Starters IF You Need

After the beginning, you will be asked to choose a Starter Pokemon to adventure with, If you want to pick the gender and nature, you can reset at this point.

▶Best Starter Pokemon
& How To Re-Roll

Then You Can Freely Proceed The Three Storylines

Follow the above, you can challenge in order of the opponent's level.

Level Of Obedience Increases As You Conquer Gyms

Set Your Destination On The Map

After opening the map with Y Button, you can press A Button to set your destination. Once a destination is set, the direction will be shown on the minimap as you move through the field, it is easy to avoid getting lost.

Fly To The Place You Have Been Before

Press Y Button to open the map, move the cursor to the feather mark, and then press A button to Fly to there instantly. Feather marks are set at Pokemon Centers and some of the places you have been.

Explore The Map As You Go

There are many items fallen in the field, not only Potion and other items sold in stores, but also important items such as Rare Candy and TM.

Defeat Trainers To Get Rewards

The man in front of the Pokemon Center in each town will ask you to defeat a certain number of trainers in a certain area. If you accomplish it, you will receive items such as TMs or [Amulet Coin] so be proactive to battle trainers when you find them along the way.

You can challenge Tera Raid Battles by touching the crystals in each location. It's able to chatch Tera Type Pokemon different from their original types. And you can also challenge in Multiplayer.

There are some wild pokemon glowing on the field, they will become Terastalized once you enter the battle. You cannot catch them in this state, but if you deal a certain amount of damage to them, the Terastal will be removed and you can catch them.

Best Pokemon In The Early Game And How To Train Them

Best Pokemon For The Early Stage

When Sprigatito Is Your Starter

When Fuecoco Is Your Starter

When Quaxly Is Your Starter

Proceed While Fighting With Trainers

The trainers in this game will not fight unless you talk to them. You can ignore them and proceed without battles, but you may obtain more experience from Pokemon trainers, so it is recommended to proceed while battling them in order to level up.

Use Auto Battle Against Wild Pokemon For Leveling Up

Let the Pokemon that is walking with you move toward the opponent and automatically battle with the other Pokemon. Since it wouldn't cause they encounter, there is no need to select moves or do anything. This is an efficient way to level up your Pokemon.

Able To Forget And Remember Moves At Any Time

Select "Check summary" from your Pokemon Team, you can let your Pokemon remember or forget moves by pressing A button on the moves screen. It is possible to remember forgotten moves at no cost, so feel free to customize the moves.

Make A TM With TM Machine

Using the TM Machine in Pokemon Centers, you can make the TMs you want. This requires Pokemon's fallen items and LP(League Points) as materials. As you progress through the story and pick up TMs dropped in the field, the lineup of TMs you can make will increase.

Ride On Koraidon/Miraidon To Travel

You can travel by riding on the back of Koraidon in Scarlet or Miraidon in Violet. At first, you can move quickly and make small jumps as the bicycle in the previous games, and other abilities can be unlocked as you progress through the story.

Obtain the Titan Badge by defeating Titan Pokemon, the ability corresponding to Titan Pokemon will be added to the Legendary Ride. As the abilities are unlocked, you will able to explore the map more comforbly than before.

Things To Know For Beginners

Swap Pokemon Between Box And Party At Any Time

You can swap the Pokemon between the box and the party at any time by pressing X Button to open the box from the main menu.

Press X Button to open the main menu, then move the cursor on the Pokemon Team and press - Button to activate "Auto Heal," which will automatically use recovery items until the Pokemon is fully recovered .

Items Are Used In The Following Priority Levels

In "Auto Heal", the recovery items are consumed in the order above . For example, if you have a lot of Potions, Fresh water will not be consumed until all of the Potions are used up.

▲Pokemon's name and level will be shown.

The Camera App can be activated by pressing down on the D-Pad. You can take memorable pictures of your favorite Pokemon or scenery. But the Camera App is disabled only during the Legendary Ride.

▶How to use Camera App

Interact With Others In Co-op Play

You can play in Co-op mode by using the communication function Poke Portal. Press X Button to open the menu and select the Poke Portal.

What You Can Do In Co-op Play

Explore The Paldea Region With Up To 4 Players

Pokemon Scarlet and Violet Co-op Play allows you to explore the great fields of the Paldea region with other players. Let's enjoy the encounters with various Pokemon.

Four players can take on Tera Raid Battles, wherein they can work together to fight Terastalized Pokemon, which is the new feature in this game, and the battles take place in realtime.

You can have a Picnic with the Pokemon which is walking with you, which allows you take group photos and make Sandwiches with up to four players. Also, there is a chance to find Pokemon Eggs by having your Pokemon play with other trainers.

Exchange And Battle With Other Players

As in previous games, you can interact with other trainers through "Trade Pokemon" and "Battle Pokemon".

Interact With Pokemon In Picnic

You can hold a picnic in a flat outdoor area by , where you can interact with Pokemon, recover Pokemon, and make friends with them.

What You Can Do In Picnic

In Picnic, you can make a Sandwich by combining "Ingredients", "Condiments" and "Toothpicks". Eating the Sandwich will not only restore Pokemon's health, but will also have other effects such as increasing experience and Shiny spawn rate.

▶How To Make Sandwiches

There is a chance to find Pokemon Eggs by having your Pokemon play with other trainers, and it is also able to get Pokemon Eggs during the Picnic in Co-op Play (Union Circle).

You can wash your Pokemon to remove the dirt from battles. After being washed, Pokemon's health will be restored and their Happiness will increase.

Play With Pokemon And Get To Know Them

Talk to them and play with them in Picnic, you may find a side of them that you didn't see.