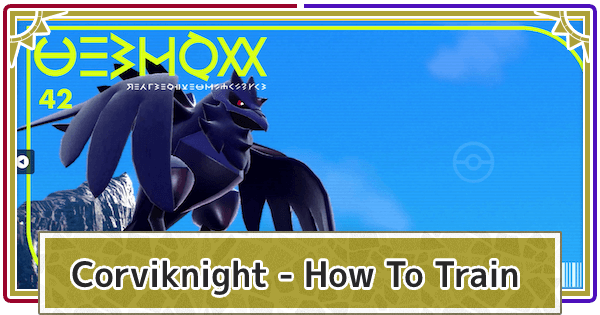 How to train Corviknight Build For Raid Guide in Pokemon Scarlet and Violet (Pokemon SV). See how to train, best move sets, Effort Values, recommended skills, and what to bring.

Corviknight is a versatile Pokemon that can support both Physical & Special. It uses Screech for Defense debuff and Fake Tears for Special Defense debuff.

Mirror Armor has an effect that can bounce off all abilities from the enemy. It is great & powerful.

In addition to Corviknight's ability, it is possible to block with Taunt and strong effects from Tailwind since it only affects itself. When challenging raids with a Support type Corviknight, it is recommended to ally with 3 attackers.

How To Train Corviknight For Raids

If you are going to catch it in the wild, it is recommended to look for Corviknight. You can find Corviknight near the Research Station No. 2 of Area Zero. Remember the Individual Value is random & Hidden Ability cannot be modified thus training is significant.

Recommended For 5★ Raid Or Higher

You can get a Corviknight from a 5★ or higher raid, and it will be easier for you to get a Hidden Ability and high stats individual. Since you are using it for Support, do not need to worry about the Tera Type.

How To Make Strong Pokemon?

Reroll In Advance To Save Money

Once you got the Corviknight, use items to train it be an ideal individual Pokemon. Each item costs money so if you want to save, it is recommended to reroll its Nature, Individual Value, and Ability.

With Ability Patch, Corviknight's Ability can be changed to Mirror Armor (before evolution: Big Pecks). If you do not have one, you can get it from ★6 Raids or you can replace the Hidden Ability separately. Although, you do not need to use Ability Patch if the original Ability is already Mirror Armor.

Raising Corviknight's DEF is strategic and advantageous. If you are planning to use Corviknight more in raids, it is recommended to increase SP. DEF and correct its Nature using Mints. If you are not going for the offense, you can reduce the damage it inflicts to itself when confused, by modifying it to either Bold or Calm.

Since Corviknight's role is a support, it is great to focus on improving its durability. If you prefer to have a Nature that leans on SP DEF, raise SP. DEF instead of DEF.

If You Can Afford It, Buy Items and Strengthen Quickly

If you clear the 5 or 6 star Tera Raid, you can get Exp. Candy L or Exp Candy XL. It is the most efficient way to level up when training a Pokemon.

If you do not have enough candies to raise its Level to 100, try to defeat Chansey in North Province Area Three to raise the Level quickly. Keep leveling up until you have enough candy to get to Lv 100.

How To Level Up Fast?

Use the Bottle Cap to "Hyper Train" and raise the Individual Value to the highest. Hyper Training can be done by speaking to the NPC near the Pokemon Center in Montenevera.

In addition to the moves mentioned above, it is also recommended to use Reflect, Light Screen, & Defog which can reduce incoming damage. Choose the moves that can provide the best support for the team.

How To Use Corviknight In Raids

When supporting a Physical attacker, using Screech is not guaranteed to hit so it is recommended to use Wide Lens to increase the hit rate.

Use the appropriate debuff according to the attackers in your team. If you are going to support a Physical attacker, use Screech and Fake Tears for Special attacker.

If ever a Pokemon uses Status Move which can be troublesome, you can prevent it with Taunt.

If the Pokemon of your allies are losing SPD, use Tailwind to boost it.

When the enemy has conjured a barrier, the effect of Status Move no longer works. Use Cheer until your allies successfully break the barrier.