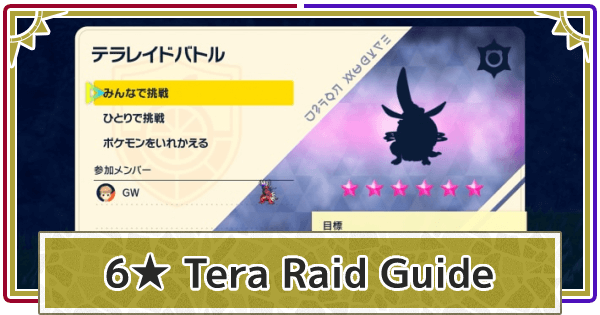 The 6-star Raid battle will be released after clearing the Academy Ace Tournament and upon clearing the 4-star or higher Raid 10 times. Multiplayer/Co-Op is also counted, so make use of the Raid bulletin board.

In order to watch the ending of the game story, you need to first complete The Way Home battles which appears after completing the three routes.

After talking with Geeta at the Director's Office, visit the various gyms and have a rematch battle with the gym leaders. The level and handheld Pokemon have changed once the game has ended, so make sure to train your Pokemon more before you try again.

After completing the Rematch with the 8 gym leaders, you can finally participate in the Academy Ace Tournament. The average level of the opponents are Lv 60 and above, so be sure to raise your skill level before participating on the challenge.

After completing the Academy Ace Tournament, Jacq will contact you and will ask you to participate in a Tera Raid battle with him.

After completing the Academy Ace Tournament, you will receive a notification from Jacq that the 6-Star Raid Battle is already unlocked after clearing 10 Raid battles of 4-Star or higher. Use the recruitment board to clear the 6 Star Raid battles.

6-Star Raid is a difficult Tera Raid Battle in which the Individual Value (IV) of the Pokemon you can obtain is 5-IV or more, and you can also get other items such as Ability Patch, that changes the Ability to Hidden Ability and PP Up.

"The Unrivaled Charizard" battle raid event is held during the period above-mentioned. The Charizard event is one of the very valuable events in the game, so make sure to unlock the 6-Star Tera Raid first.

Appearance Of The Crystals Are Different

The crystals for the 6-Star and 5-Star Tera Raid Battles have a different appearance. You can easily distinguish them as 6 stars have a dark-colored crystal, while 5 stars have a lighter color.

Playing Tera Raid Battle In Solo Is Not Recommended

Completing the 6-Star Tera Raid is very difficult, the same as for the 5-Star so it is recommended that you prepare a high-level Pokemon that can target the opponent's weaknesses and also join challenges through Multiplayer/Co-Op mode.

Some of the rewards obtained after winning a 6-Star Tera Raid Battle varies depending on the Pokemon. You can obtain Feathers and Mints in each battle, so if you plan to get Mints, you can challenge and win a battle.

Rewards For Each Pokemon