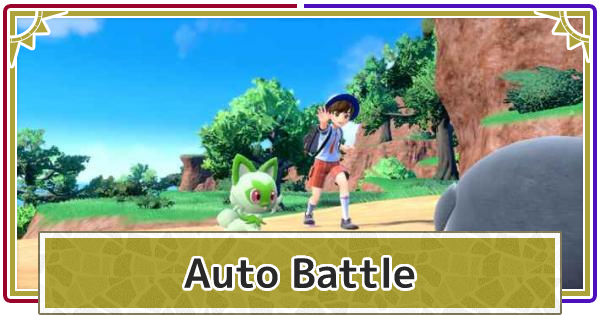 How To Auto Battle

Use "Let's Go!" To Wild Pokemon

Auto Battle can be done by using the Let's Go command towards Pokemon you find on the field. With Walk with Pokemon, Pokemon will move towards the Wild Pokemon and battle it automatically. No input from the player is required and it does not enter a Battle stage with the Pokemon.

Useful For Leveling Up & Item Farming

Upon winning an Autobattle, every Pokemon on your team will receive EXP. Pokemon in the team that did not battle will receive half of the EXP received by the battling Pokemon. You can raise the level of the Pokemon you just acquired without needing to bring them out to battle. You can also get items here to save time!

Can Be Used Against Team Star When Battling Grunts

In battles against Team Star, you will continuously battle a large amount of Pokemon one after another. The Pokemon should be defeated within the time limit, so using Auto Battle here will definitely save time.

Auto Battle will result in the target Wild Pokemon being defeated. With that, do not challenge Pokemon you want to capture with Auto Battle. Instead, initiate a Normal Battle with them!

What Is Auto Battle?

Auto Battle is a new feature in Pokemon tied to the Walk With Pokemon feature. It will let you battle with Pokemon without having to go to a Battle stage. While Auto Batte is active, you can freely explore your surrounding and watch the battle.