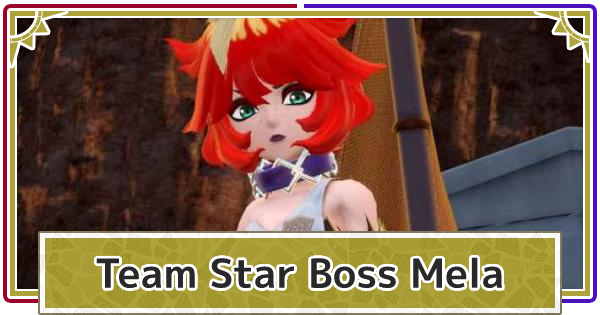 Mela is the Team Star Boss in Pokemon Scarlet & Violet (PokemonSV). This guide includes how to beat Mela, Best Pokemon to use, Pokemon team, and more!

Recommended Pokemon & How To Beat Mela

All of Mela's Pokemon are Fire Types, which are weak to Water/Ground/Rock type moves. Use these moves to gain the advantage in the battle.

Beware Of Drought For Water-Type Moves

Mela's first Pokemon Torkal has the Drought Ability, which causes the weather to be clear for 5 turns. The power of Water Type will be halved. Either try to survive for 5 turns or defeat it quickly using moves it is weak against.

The Star Mobile (Revavroom) has a large HP pool and has the Speed Boost Ability, which increases its speed with every turn. It also has the powerful move Overheat. Defeat it as fast as you can!

The hideout of Team Star's Fire Crew is located northeast of Artazon. The Artazon: East Pokemon Center is the closest.

Once you get to the hideout, you'll have to battle a grunt at the front of the gate. This is a normal one-on-one Pokemon battle.

After defeating the grunt, check the gate. Your challenge will start with the first three Pokemon!

Once you enter the hideout, use Auto Battle to defeat 30 Pokemon within 10 minutes. During the challenge, you will be to use Star Barrage and let up to 3 Pokemon out at the same time.

Pokemon That Grunts Use

Can Recover Through NPC Or By Vending Machine

Talk to the NPC near the entrance or check the vending machine in the hideout. Pokemon can be healed there!

If you can defeat 30 Pokemon within the time limit, you will head straight to the battle with Mela. Defeat her last Pokemon Star Mobile to complete the hideout!