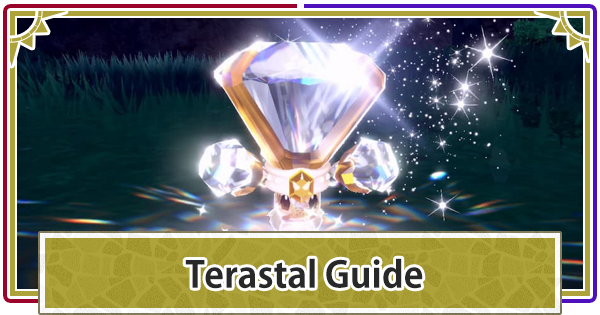 A new feature in Pokémon's Scarlet & Violet that enhances the type of a Pokémon during battle. This Terasatal phenomenon can only happen in the Paldea region. By activating Terastal during battle, the type and looks of the Pokemon will change.

All Pokémons Can Be A Terastal

According to the official Pokémon Scarlet Violet, rare tera-type Pokémon can be obtained in Tera Raid battles. Types can be determined through the color of their crystals before the raid challenge starts. Use that as a reference during the battle to have an advantage.

Pokemon In The Wild Can Also Be Terastallize

The Pokemons in the wild that are glowing can also be Terastallized. When their HP decreases to a certain amount, the Terastallize form will be disabled and you may be able to catch them.

The Pokemon's Terastal will change depending on its Tera Type. Once the Pokemon Terastallized, it has the possibility to negate or decrease the damage that you will recieve from the opponent making this a reliable ability.

A Pokemon is treated to have a single Tera Type, note that when the dual-type Pokemon are Terastal it will still only have one type.

All Kinds Of Tera Type That Are Available

Keep in mind that during battle, Tera Type has different types, whereas Pokemons may change all its types into any kind of type.

Terastallize A Pokemon Once Per Battle

It is recommended to plan things out on which Pokemon to use before engaging in a battle, since Pokemon Terastal can only be used once per battle.

Tera Blast is a move that develops into a Tera Type technique during the Terastal. With the ability to change types, this can be used as a special move to be used in a battle.

Unlike the Hidden Power which was also present in the previous Pokemon generations, this move can also be used for any physical type of Pokemons. It is a similar move technique but with different utilization.

Terastal - How To Terastallize A Pokemon?

Tera Orb is a special item that is used to Terastallize Pokemons, and only trainers inside the Paldea region are allowed to use it.

Use The Terastal Energy To Recharge The Tera Orb

Once the Tera Orb loses all of its Terastal Energy, you won't be able to use it again unless you recharged it by touching crystals that glows with Terastal Energy. You can also go to the nearest Pokemon Center.

When a pokemon is eligible to be in Terastal state, a Terastal mark button will appear on the screen during battle. Select it in order to Terastallize a Pokémon.