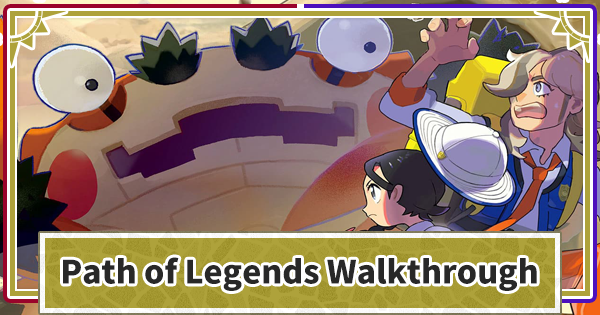 Working On Different Routes At The Same Is Recommended

In Pokemon Scarlet and Violet, there are 3 story routes. You can start at any route, but instead of working on 1 route, it is recommended to work in the same level routes at the same time. In the end you would need to complete all the routes, so it will be easier if you work on them together.

▶Check Out All of Story Walkthrough

The Stony Cliff Titan has a lot of weaknesses and the Pokemon that you can capture in the beginning of the game, Water/Grass/Fighting types, are very effective. Especially if you chose Fuecoco as your starter, you will not have an effective move so you want an effective type of Pokemon.

The next Open Sky Titan is Lv 19. The Cortondo Gym and Artazon Gym are lower levels than this Titan, so you want to defeat them first.

Easier If You Have Electric/Rock/Fairy Type Pokemon

The effective types for the Open Sky Titan are Electric/Rock/Fairy. They are fairly easy to get in the beginning of the game, so you would want to add some to your party.

Next is the Lurking Steel Titan which is Lv 28. The Levincia Gym, Dark Crew, and Fire Crew are lower levels than this Titan, so you want to defeat them first.

The Lurking Steel Titan is a Steel type, so it is weak against Fire/Fighting. Usually Ground is also a weakness, but with its ability it will be non-effective so you want to avoid using Ground types.

Next is the Quaking Earth Titan which is Lv 44. It is recommended to defeat the Cascarrafa Gym, Medali Gym, and Poison Crew prior to challenging the Titan since the levels are similar.

Differentiates With Version You Are Playing

The Quaking Earth Titan differentiates with the Pokemon version that you are playing. Scarlet is Ground/Fighting and Violet is Ground/Steel so you need to find a Pokemon that best fits its weakness.

The False Dragon Titan consists of fighting Dondozo 2 times, and Tatsugiri 1 time, which is a total of 3 battles. You can go to a Pokemon Center, but it is a bit far so it is easier if you have a lot of healing items so you can heal right on the spot.

Next you will be battling against Arven which this strongest Pokemon is Lv 63. It is recommended to defeat the Fighting Crew of Team Star before battling Arven.

Complete The Other Routes

After completeing the Path of Legends, you need to defeat the Last Bosses in the other routes. If you have been defeating the other Gyms and Starfall Street, you will be able to challenge the Last Boss right away.

After Completing All Routes To Challenge The Last Boss

After completing all routes from Victory Road/Path of Legends/Starfall Street, you will be able to battle the Last Boss. After defeating the Last Boss, it will finally be the ending and you will unlock the Post Game features.

▶Post Game Guide - Unlockables & What To Do In The Endgame

What Is The Path Of Legends?

The Path of Legends is where you defeat Titan Pokemon in certain parts of the map and collect Herba Mystica with Arven. Titans are a lot bigger and stronger than a normal Pokemon and they will be harder to defeat.

When you defeat a Titan, you will be able to do more things with your Ride. There are places that you can not go if you do not have these special Ride abilities, so it will make your adventure easier if you defeat the Titans.

If you defeat the Stony Cliff Titan (Klawf) you will unlock "Dash". If you press into the L Stick, you will be able to speed up. While you are dashing and hit a tree, Pokemon will come down and a battle will start.

After defeating the Lurking Steel Titan (Orthworm) you will unlock "Jump High". If you press the B Button long, you will be able to jump higher than normal. If you want to jump to a higher position or to a further place, this move is very useful.

Glide (Fly Through The Sky)

When you defeat the Quaking Earth Titan, you will be able to Glide from high places. But since it is a Glide where you descend after jumping, it is not for you to fly to your destination or freely fly across the sky.

When you defeat the False Dragon Titan, you will unlock "Climb Surfaces". There were places you were hit against the wall and not proceed, but with this you will be able to go to locations you had not been able to before.