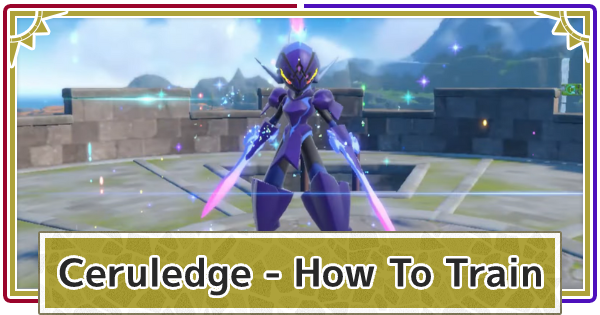 How to get Ceruledge Build For Tera Raid Guide in Pokemon Scarlet and Violet (Pokemon SV). See how to train Bitter Blade, Effort Values, recommended skills, and what to bring.

Physical Attacker That Can Disable Fire Moves And Can Heal Itself

When using Ceruledge in the Cinderace Tera Raid Event, make sure to use Bulk Up to increase durability in battle and Psycho Cut to target the weak spots of your opponent. The Tera Type should be set to Ghost to nullify the damage effects from Cinderace's Fighting type moves.

Ceruledge is a Physical Attacker that can use its Flash Fire ability to disable Fire-type moves. Its signature move, Bitter Blade, is the most powerful HP recovering move, making it easy to fight while recovering HP.

Since Ceruledge's main firepower is its Fire and Ghost type moves, it can play an active role in the above types of Raid that can exploit weaknesses with these moves. In addition, if it is used against a Pokemon that is originally a Fire type, you can use it because it can use its ability Flash Fire to disable Fire moves.

Likely To Be Useful For 7★ Cinderace Raid

Ceruledge is likely to be useful in the ★7 Cinderace Raid battle for the coming up limited-time event. It can continue to attack while recovering with Bitter Blade while disabling both the opponent's main Fire and Fighting moves.

How To Train Ceruledge For Raids

Ceruledge is limited to Violet and only appears in Raids with 5 to 6 stars, so if you don't have it, catch a pre-evolved Charcadet. Charcadets appear over a wide area, but the probability of their appearance is low, so it is recommended to activate Encounter Power's Fire when they do not appear easily.

Reroll Or Breed To Save Money

Finally, items are used to raise them to ideal individuals. Since each item costs money, it is recommended to reroll its Nature, Individual Value and Ability if you want to save some money.

Collect Pieces Of Sinistea At Its Habitat

When Sinistea is defeated or captured, a piece of Sinistea fragment can be obtained. It can also be acquired by defeating it with Let's Go! You can search around its habitat or if a Mass Outbreak is occurring then it is recommended to go there and capture a lot.

When training a Ceruledge caught in Raid, it is necessary to change its Ability to Flash Fire when its Ability is Weak Armor. However, it is a waste to use it to revert from Hidden Ability to normal Ability, so it is recommended to have a spare Charcadet with Flash Fire unless you have extra Ability Patches at hand.

Use Tera Shards to change the Tera Type to match the enemy's nature to get the upper hand in battle. It is recommended that you use the fire tera that can increase the power of Bitter Blade while use Ghost Tera Shard if you want to disable Normal and Fighting moves of your opponent.

Can Be Changed In Medali's Treasure Eatery

Tera Type can be changed by going to Treasure Eatery in Medali. Enter the restaurant and talk to the NPC in the kitchen. It won't be available until Medali Gym unless you have cleared it, so if you haven't already, attack it first.

Adamant Mint can be used to change Nature into Adamant. If you don't have one, go to Chansey Supply in Mesagoza and buy one for 2,000 Poke Dollars. If the original Nature is Adamant, there is no need to use Mints.

To achieve both durability and damage consistency, raise the stat to 252 for both HP and ATK. Add the remaining points to DEF.

If you can afford it, the fastest way is to buy Vitamin in bulk and distribute the Effort Value. However, each piece costs 10,000 Poke Dollars, to boost it to 1 stat approximately 26 pieces may be used while roughly 50 pieces (500,000 Poke Dollar) are necessary to raise all stats to the maximum.

By capturing or destroying wild Pokemon, you can earn 1-3 Effort Value. If a Power Item is given, it is also possible to increase the Effort Value gained by 8. Power Item costs only 10,000 Poke Dollars each and is recommended for those who want to save money.

If you can't see the spawn location image, click to enlarge.

If you can't see the spawn location image, click to enlarge.

You can get Exp. Candy L or Exp. Candy XL if you clear Tera Raid with 5 or 6 stars. Because it is most effective to level up a single Pokemon, it is recommended that you work on your Pokemon team one at a time.

Perform Hyper Training using the Bottle Cap and maximize the Individual Values other than Attack. Hyper Training can be done by talking to the NPC behind the Pokemon Center in Montenevera.

Where To Perform Hyper Training

Best Moves To Get For Ceruledge

Ceruledge's mainly draws its firepower from Bitter Blade and also recovering a portion of its HP while Swords Dance raises the user's Attack stat, both of them are fixed while you can use the other open slots for other moves. All of the moves in the open slots may be used to provide for additional counter measures against the opponent, thus the composition of moves should be adjusted based on the opponent.

How To Use Ceruledge In Raids

How To Use It In The 7★ Cinderace Raid

Life Orb is recommended to be used as a Held Item to increase the firepower of both Bitter Blade and Psycho Cut so you can consistently deal damage in the ★7 Cinderace Tera Raid Event. Since the holder using Life Orb loses 10% of its max HP after using a damaging move, you may use Bitter Blade's HP recovery to counter its negative effects and secure its survivability in battle.

In the first turn, perform Bulk Up to increase the user's attack and defense by one level. Increasing defense will reduce damage taken and make it easier to afford to use buffs in the following few turns.

In the second and third turns, perform Swords Dance twice to increase ATK by 4 steps. If you there's a chance to follow it up, you can use Bulk Up one more time and increase ATK up to the maximum of 6 stages, especially during the first turn.

Attack the target when you are done using buffs to increase your stats. When Ceruledge's HP is low, use Bitter Blade to recover while attacking while use Psycho Cut to do the most damage when you have enough HP. As the opponent's HP decreases,the effects of buff and debuff moves are reset, so make sure to consistently attack while reusing buffs and Cheer.

How To Use Ceruledge In Normal Raids

Since Ceruledge is able to learn Bitter Blade, which allows it to heal in proportion to the damage it inflicts, it is recommended to give it items that can increases its firepower from its attacks. You may choose between Charcoal and Life Orb, Charcoal does not have a con and can increase fire moves by 1.2 times while Life Orb has a disadvantage, but it can increase all moves by 1.3 times so you might consider this when choosing.

Once the battle begins, use Stat boost moves, weak moves, and wall moves to make it easier to deal damage and increase survivability. It's important to use shields or barriers to protect and reduce the damage you receive when your HP is low to avoid getting knocked off in battle, also you might consider using it when you've finished using buffs and status moves.

When ready, you can initiate an attack with Bitter Blade or Shadow Claw depending on the type of opponent you are taking on. The effects of buff and debuff moves are reset when the opponent's HP drops, so make sure to attack often while using buffs and Cheer.

Ceruledge is not good at all in the Cinderace raids. Do not use. 1. Slowbro 2. Armarouge 3. Espathra. All better options.