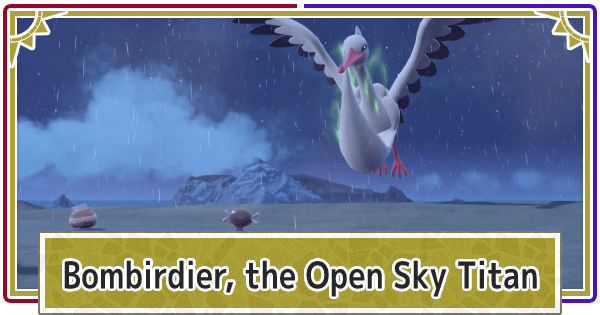 Best Pokemon To Use Against Open Sky Titan

Open Sky Titan is weak against Electric, Ice, Rock, & Fairy type moves. In particular, Flaaffy & Tadbulb are easy to get from the beginning and the Flying type damage can be reduced by half, which is advantageous to you.

Open the map and head to the Pokemon Center at West Provinces (Area One) and proceed North. It is convenient if you pin the location for the Open Sky Titan on the map.

As you go up the mountain where Open Sky Titan is located, you will encounter a number or boulders from the sky that can stop you in your progress. Do your best to avoid the boulders as you move forward with your Legendary Ride.

How To Reach Open Sky Titan

The wave of rolling boulders along the path up to the mountain can be avoided with Legendary Ride. To reach the Open Sky Titan, it is recommended to climb up using the Dash ability that can be unlocked from Stony Cliff Titan Challenge.

Defeating Bombirdier, the Open Sky Titan unlocks the ability that enables you to move across the water. Conquer the sea and river, and approach underwater Pokemon with this ability. Also, if you defeat Stony Cliff Titan and unlock the Dash ability, you can Dash as you move across the water as well.