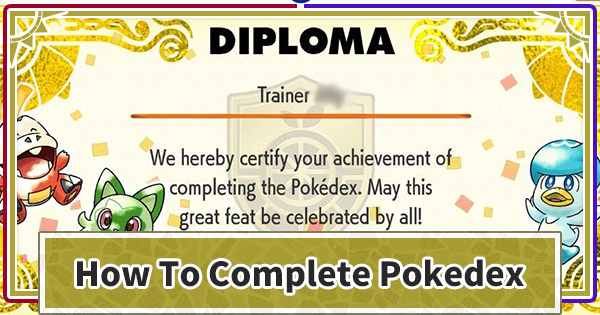 Effective Way To Fill In Pokedex

▲Pokemon that has learned False Swipe and sleeping status Move

High Level Pokemons and Lesser Legendary Pokemon may not be able to catch with the Quick Ball. In that case preparing a Pokemon to weaken or Status Effects your opponent to make them easier to capture is recommended

"Spore" is the only Move that puts the opponent to sleep instantly, with an accuracy of 100. Breloom has high attacking stats among Pokemon that can learn False Swipe that can leave the opponent with HP of 1.

If there are a lot of uncaptured Pokemon, you can walk around the field and catch them as you go then rather checking one by one. Catch as many uncaught Pokemon as possible.

When you lock on (press and hold ZL) a wild Pokemon in the field or when entering the battle a Pokeball mark will appear on top of Pokemon's name identifying if you've captured the Pokemon or not. If you come across a Pokemon that you don't remember whether you caught it or not, use this method to identify it.

Open the Pokedex in game to see which Pokemon you have not yet caught. Habitat of undiscovered Pokemon (Blank slots in the Pokedex) cannot be identified in the game so, see the article linked below and go catch them.

In the Paldea Pokedex list linked above, tap the ball symbol in the upper right corner to check the box. You can adjust the feature so only checked Pokemon is shown or hidden. Utilize it as a memo when filling the Pokedex.

Once you know which Pokemon are not caught yet, go to the location where they appear and capture them.

Throw Quick Ball during first turn, if you can't catch it, put it to sleep or reduce its HP and then throw the ball again.

Some evolved Pokemon do not appear in the wild, so you must catch them before evolution and then evolve them, or catch them as evolved in a Raid.

Since it is a hassle to go after the Pokemon you want in a Raid, it is recommended to catch the pre-evolved Pokemon and then evolve it.

Pokemon That Do Not Appear In The Wild After Evolution

Starter Pokemon and version exclusive Pokemon cannot be obtained alone. Since you cannot fill up your Pokedex without having someone to trade you these Pokemon, use the trade board to recruit a trade partner.

Open the Pokedex in game to see which Pokemon you have not yet caught. Make a note so you know which Pokemon to look for when trading.

In the Paldea Pokedex list linked below, tap the ball symbol in the upper right corner to check the box. You can adjust so only checked Pokemon is shown or hidden. So utilize it as a memo when trading.

Pokedex Will Be Filled By Acquiring Any One Type

Starter Pokemon does not appear in the wild, so look for a trade partner to trade with. If you can exchange the Pokemon before evolution, you can also fill in the Pokedex by leveling them up and evolving them.

Trade Starter Pokemon With Each Other

If you're looking to trade for one of the starter Pokemon, picking your own starter Pokemon as the trade content will benefit both sides thus increasing the trade to be easier. Use your Starter and Ditto to make eggs for trades. If making eggs is time consuming, use Exp. Candy XL as a trade material.

It Is Recommended To Trade Version Exclusive Pokemon With Each Other

「Gholdengo」is the most time consuming Pokemon to evolve, so it is recommended to trade just to fill the Pokedex. If in condition to return the Pokemon after the Pokedex is filled, there are people who are willing to trade for useful items

Once you have reached this point, all you have to do is trade for the remaining Pokemon to fill up your Pokedex. Fill both Pokedex and trade extra hatched eggs, exp candy and other useful items.

How To Obtain Rare Pokemon

▶How to Collect Gimmighoul Coin

Palafin requries to level up Palafin to level 38 in multiplay to evolve. If you can't multiplay, try to find and catch them in Terra Raid or use forum to evolve.

▶Use forum to evolve Palafin or look for trade

You can challenge Lesser Legendary Pokemon by pulling 8 shining Stakes. To reach certain stakes and sealed locations, there are certain Legendary Rides abilities that are needed. First you must defeat the certain Titan Pokemons for you to learn those abilities.

Pokedex Rewards And How To Obtain Them

Report To Jacq To Receive Rewards

Talk to Jacq in Academy's Biology room to receive rewards based on amount of Pokemon captured. Especially False Swipe and Shiny Charm are very useful.

In Pokemon SV, you can earn rewards little by little according to the number of Pokemon you have caught. Open Pokedex and press the X button to receive various rewards.

How To Open/Look At Pokedex

Pokedex can be accessed anywhere by pressing - button. This is an easy way to check the Pokedex so do this frequently.

Once map is open press X to display list, then select Pokedex.

Once you open Pokedex, you can look through your Pokedex freely. You can check for recently fought, caught Pokemon.