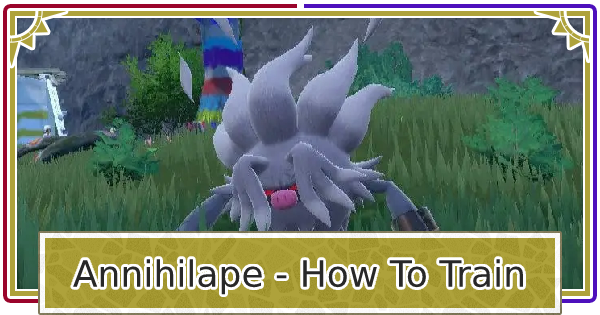 How to train Annihilape Build For Raid Guide in Pokemon Scarlet and Violet (Pokemon SV). See how to train, best movesets, Effort Values, recommended skills and what to bring.

Annihilape is a Ghost/Fighting type Pokemon with high Attack Base Stats. It is a high-firepower attacker that makes use of its exclusive Rage Fist moves.

Annihilape is a Pokemon that takes a long time to start hitting due to the increased power of Rage Fist. If you play in Solo, the time limit doesn't reduce even if NPCs become faints, and you have relatively more time to spare, making it a Pokemon suitable for solo Raid.

Recommended For Raid Where Ghost-type Move Is A Weakness

About The Exclusive Move, Rage Fist

Annihilape's exclusive move, Rage Fist, increases its power with the number of times it has been hit. The power increases by 50 for each hit, with a maximum of 350, making it a powerful move even for Raid.

How To Train Annihilape For Raids

Summary Of Things To Do

The pre-evolutions, Mankey and Primeape can be found on the map. Especially Mankey is relatively common in the wild, so it is easy to catch.

Reroll If You Want To Save Money

Once you got the Annihilape, use items to train it be an ideal individual Pokemon. Each item costs money, so if you want to save even a little money, it is recommended to reroll its Nature, Individual Value, and Ability.

How To Get Strong Pokemon - Breed Best Stats Guide

With the Ability Capsule, you can turn Ability into Vital Spirit. If you don't have it, get it at Delibird Presents. If the original Ability is Defiant, there is no need to change the Ability.

With Adamant Mint, you can change Nature stats into Adamant. If you do not have one, go to Chansey Supply in Mesagoza or other places and buy one for $ 20,000 Poke Dollars. If the original Nature is Adamant, there is no need to use Mints.

Since Annihilape can increase its DEF with Bulk Up, it'd be more efficient to slightly distribute the Effort Values to DEF. Also, if the firepower is too low, it will run out of time before defeating the enemy, so it is best to distribute Effort Values to ATK to the maximum. The extra Effort Value 2 does not affect the status, so there is no problem even if you do not set it.

Raise HP To 252 If It Is Troublesome

If You Can Afford It, Buy Items and Strengthen Quickly

Use Rage Fist More Than 20 Times To Level Up

The evolution requirement is to use Rage Fist, which Primeape learned at level 35, at least 20 times in battle. When Primeape levels up and meets the required conditions, it will evolve into Annihilape.

If you clear the 5 or 6 star Tera Raid, you can get Exp. Candy L or Exp Candy XL. It is the most efficient way to level up when training a Pokemon.

If you do not have enough candies to raise its Level to 100, try to defeat Chansey in North Province Area Three to raise the Level quickly. Keep leveling up until you have enough candy to get to Lv 100.

▶How To Level Up Fast

Bulk Up and Drain Punch are TM moves, so check TM locations and materials.

How To Use Annihilape In Raids

Before you take on Raids with Annihilape, don't forget to let it hold an item. The above items are recommended.

The power of Rage Fist will not increase unless you get attacked, so give priority to Bulk Up, which raises DEF so that your Pokemon won't be fainted easily in battles even if attacked.

Enemies Can Cancel Your Stats Increase

The increases in your stats could be canceled by Raid bosses. In such cases, you need to use Bulk Up again. If you are about to be fainted due to the loss of HP, use Heal up!

After stacking Bulk Up 2 or 3 times, use Screech to lower the enemy's defense, or use Taunt to stack more Bulk Up.

Let's attack with Rage Fist after getting attacked five or six times. The power increases up to 350 after 6 hits. You might be able to beat the opponent in one blow if you exploit its weakness.

The Number Of Hits Continues Even If Annihilape Faints

The power increase of Rage Fist continues even if Annihilape faints. The number of times it gets hit is not reset even if it has fainted.

Been able to solo 5-star raids with ease with this one, without really having to worry about type effectiveness against the tera type. Haven't tried it against a dark raid yet but for everything else so far it's been mint.