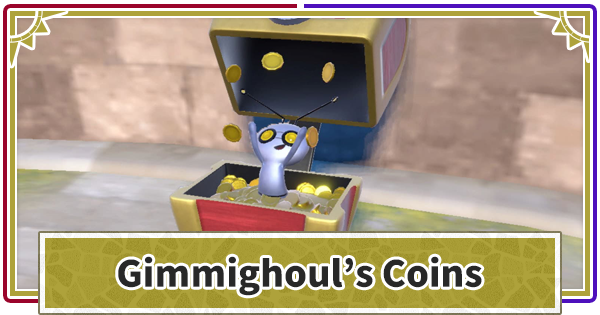 Gimmighoul's Coin Location Guide in Pokemon Scarlet & Violet (SV). See where you can find the coins and how to collect them.

Roaming Form Gimmighouls In the Map

Roaming Form Gimmighouls are very small and very hard to see in the map. You must look really closely to try gathering all the coins.

The Number Of Pieces Is Random After The 2nd One

Chest Forms reappear randomly over time, but the number of pieces obtained when they are defeated is also completely random. In some cases, 10 pieces are obtained, while in other cases, more than 500 pieces can be obtained.

How To Find Gimmighoul

Chest Form Is Often Found In The Watchtowers And After Ruins

Chest Forms are often found in the observation towers scattered around the map and at the ruins of abandoned buildings. You can also try flying towards the Watchtowers and find some hidden chests, so if you are nearby make sure to stop by.

▲If you look carefully at the map, you will find places like the one in the image, so look for them.

Find Roaming Form Near A Signboard Or Under The Bridge

Roaming Forms can be found all over the map. The above are particularly common places, so if you see a suspicious place, look for it. It is recommended to explore the ruins of the watchtowers, abandoned buildings or nearby ruins when searching for the Chest Form.

How To Effectively Collect Gimmighoul Coins

Prioritize Getting Coins From Chest Form

▲It is recommended to find a Watchtower that has not been visited.

Chest Form has the advantage that you can get more coins at once than Roaming Form. Since you can collect more than 999 pieces necessary for evolution just by searching Chest Forms, don't forget to explore the Watchtower where Chest Forms are often found.

Required To Go To Some Places To Progress The Story

Here is a recommended route around the area to collect Gimmighoul Coins after the Chest Form has been fully collected.

Go Around The Ten Sights Of Paldea

There are a total of 10 scenic points in the Paldea region, all of which are marked with signs. Since there are Gimmighouls in various places, it is easy to go around because you only need to go around with Fly. You can make it a routine to do one round every day to collect coins.

It is recommended to fly to the South Province (Area Two) watchtower, check to see if the Chest Form is restored, and then follow the pictures to go around. The wild Pokemon in the area are also weak, so it is easy to go around.

Use The Sound Of Coins To Locate It

If Gimmighoul is in the vicinity, a sound like a tinkling of dropped coins can be heard. When you are looking for Gimmighoul, it is easier to find if you notice the sounds.

Get 20 Pieces At Medali

How To Use the Gimmighoul Coins

You need 999 Coins for Gimmighoul To Evolve

Gimmighoul is a new Pokemon . You must be careful NOT to exchange it with LP!

Gimmighoul How To Get & Location

Consumes 999 Coins In One Evolution

When Gimmighoul evolves, the 999 coins disappear. If you want to evolve another Gimmighoul, you need to collect 999 coins again.

Roaming Form confirms the reappearance of Gimmighoul at the same location after more than a day. Use the aforementioned circuitous route as a guide to collect Gimmighoul Coins in Roaming Form.

The reappearance of the Chest Form is not just a matter of time, but also randomness. The drawback is that it takes time to discover the Chest Form because it reappears somewhere in the Chest Form locations shown on the map in this article.

In addition, the number of coins available from reappearing Chest Forms is also randomized. Sometimes you receive only 10 coins, sometimes 500 or more.

Go Around Where They Appear If You Want To Capture Them

Even if you fail to catch one during the first encounter, as mentioned above, they will be randomly resurrected somewhere. It does require some time and effort to find it don't worry if you think you won't be able to get it again as it respawns after sometime, so go around the usual places to find them.

How To Check Coins

You Can Check Pokemon Materials From The Bag

Coins Beyond Pokemon Team Are From Coin Rep

Gives You More Coins Than You Can Get