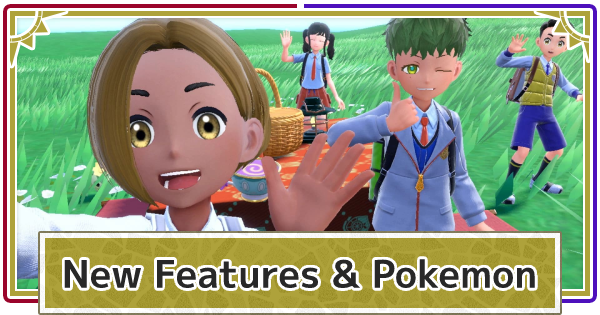 Can Be Changed To Any Type With Terastal

There are 18 Tera types in total. It does occur that a Pokemon will have a different Terra type from its original type. It appears that each individual Pokemon has their own Tera type.

Tera Raid Battles are a new type of raid battle wherein four players work together to defeat a wild Terastallize Pokemon within a time limit. The turn-based raid battle in Sword and Shield has been replaced with a seamless battle type where players must cooperate with each other in order to battle.

Pokemon In The Field Can Also Be Terastal

On the field, wild Pokemon that are glowing will Terastallize after starting a battle with them! When their HP is reduced to a certain level, their Terastallize form is removed and they can then be captured!

Unlike in previous series, there is no single storyline, but rather three grand stories. Each can be played in any order, giving you freedom in progressing the stories.

This route will take the players to gyms in various locations to gain the title of Champion. Just like in the previous installations, the goal is to reach the top of the Pokemon League!

Path of Legends is another storyline wherein you help Arvem, a senior from your Academy, to gather rare ingredients. These ingredients are guarded by Titan Pokemon so it seems that the ingredients will take a challenge to get.

This story focuses on getting into the hideouts and defeating the leaders of "Team Star", a group considered a problem at the Academy. The goal is to defeat the bosses of all the groups by entering each of their hideouts.

Challenge Gyms In Any Order

Straying away from the conventional formula of the Pokemon games, players can challenge gyms and their leaders in any order they like. Create your own strategic route according to what you have on hand.

Adventures With A Legendary Pokemon

With the new region, players will be introduced to the Paldea Form. These Pokemon are variants of previously known Pokemon with different characteristics, such as type and abilities.

According to the Pokemon website, this move lets "the user create a substitute for itself using its own HP before switching places with a party Pokemon in waiting". This move consumes more HP than a normal substitute, but it is a technique with a lot of potential.

Since there is a scene wherein Cyclizar is using it, this might be a move exclusive to Cyclizar.

A move that changes type depending to the Pokemon's Tera form. The damage of this move is based on the Attack or Special Defense, allowing for more tactical options.

An item the can copy an opponent's stat increase. Automatically used when a stat change is happening to the opponent. It is likely to be used as a countermeasure against Pokemon that can increase their stats through moves like Swords Dance.

The number of attacks in a series of moves is increased by this item. It is currently unknown whether this is practical or not since it's is not guaranteed to be the maximum number of attacks.

In this current version, all can be created with the TM machine installed in the Pokemon Center. The materials used are dropped by Wild Pokemon after battle or with the LP (League Points).

Overview Of Other Features

This function allows Pokemon to fight and pick up items on their own. It seems highly practical since it enables efficient exploration of the field.

Picnic Guide - How To Use

In this version, Pokemon Eggs are available at Picnics. How to get Eggs is still unknown right now.

Communicate With Other Players Through The Poke Portal

This title allows players to communicate with people around the world through the Poke Portal! This will require an Internet connection and a paid subscription to Nintendo Switch Online.

A new feature implemented in Pokemon Scarlet and Violet is the option to explore the same world with up to 4 players. You can show your Pokemon to each other, and cheer each other on in battle. Four people can also enjoy a picnic at the same time.

Since the setting will be a in a new region, many new Pokemon will be added. Evolved versions of existing Pokemon and region variants have also been announced, with more information expected to be announced.