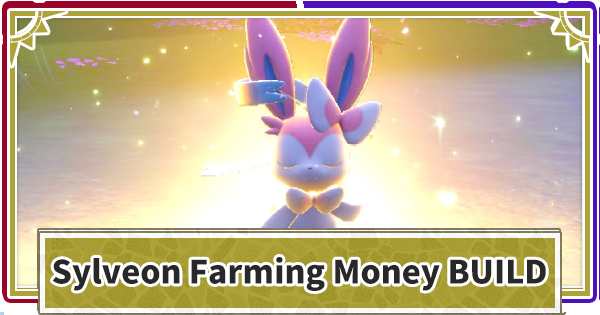 How to train Sylveon Best Build For Farming Money Guide in Pokemon Scarlet and Violet (Pokemon SV). See how to train Effort Values, recommended skills and what to bring.

The Sylveon For Farming Money

Just Consecutively Press The A Button And Win

A Sylveon trained for farming money, has been strengthened with [Pixilate], and consecutively attack with [Hyper Voice] to win the Academy Ace Tournament rounds. For this method, we have researched, Sylveon is the most stable and the most powerful Pokemon.

If You Have Chosen Fuecoco, You Should Distribute 180 To SPD

With the Starter Pokemon you choose, for people who have chosen Fuecoco, Nemona will use Meowscarada, so you should increase Effort Value by +8 and distribute 180 to overpower the SPD. The rest is to distribute to DEF so you can avoid any other risks.

You Can Bring It To Unrivaled Charizard Raid

Farming Money Sylveon can be brought to the Unrivalred Charizard Raid Event. If you join in Multi-Player mode, it is possible to complete the Raid by simply changing the Items and Moves while keeping the same EVs. Of course, you can train another Sylveon just for the Raids, but if it's a hassle, you can use this Sylveon around.

How To Train Farming Sylveon

First you want to capture Sylveon or Eevee. If you are capturing it in the wild, there is one in the North Province Area 3 as a Terastal Sylveon (Tera Type : Fairy) which is recommended. It is Lv 50 and the IV is 3V and above.

If the Sylveon has a normal Ability, you have to use the Ability Patch to change to Hidden Ability but Ability Patch is a rare item, so you want to keep this item for special needs. Thanks to the Eevee Raid Spotlight there is a lot of Eevee's roaming around with Hidden Abilities, so you might find someone who will exchange with you.

If you have a Sylveon with a normal ability, you would want to use the Ability Patch and change it to [Pixilate]. (Prior to evolving: Anticipation). If it already has a Hidden Ability, you do not have to use any items.

You can change the Nature to Modest using the corresponding Mint for it. If you do not have one, get it from the Chansey Supply Shop in Mesagoza or other areas for $ 20,000. If the original Nature is Modest, there is no need to use Mints.

※Lv 100, and if you have SPD of 31, you will be able to get the first move during the Academy Ace Tournament

If you have money to spare, you can buy a lot of items to increase your EV in a very fast speed. In total you would need $ 500000 but it is better than taking a lot of time.

These items can be bought in Chansey Supply and Feathers can be found as sparkling things on the map near Casseroya Lake or Bids in Porto Marinada.

Complete 5-star or 6-star Tera Raids to get Exp. Candy L & Exp. Candy XL This is the best way to train one Pokemon.

▶How To Level Up Fast

While farming money in the Academy Ace Tournament, you will only be using [Hyper Voice] so your other 3 moves can be anything. To use it for a Raid that is strong against Fairy type, you might want to use the moveset above.

How To Use Farming Money Sylveon

When a Pokemon that is holding an [Amulet Coin] enters a battle, your reward will be doubled. If you are farming for money, this is an item that you definitely want to have on hand so do not forget this.

With Choice Specs, Efficiency Is Decreased By Half, But Stability Is Increased

With the [Choice Specs], you will only be able to use the same move, but your Sp. ATK will be increased by 1.5 times. Since your efficiency will be decreased by half, it is usually not recommended, but if you want stability, you might want to change items.

Once you are ready, go to the entrance of the Academy, and enter the Academy Ace Tournament. If you are not able to participate yet, first complete the Story.

Use [Hyper Voice] to start defeating all the opponent's Pokemon and finish the Tournament and re-enter again and start over. If you set [Hyper Voice] on the very top, all you need to do is consecutively press the A Button.

If You Have A Special Controller, You Can Just Leave It Alone And Farm

The Nintendo Licensed Controller, "Horipad", has a special feature where it will automatically press A consecutively. If you set it to consecutively press the A Button, it will smoothly pass through the Tournament. You can use it while you are sleeping or at school/work and keep it on the same menu, it will be an easy way to farm money.