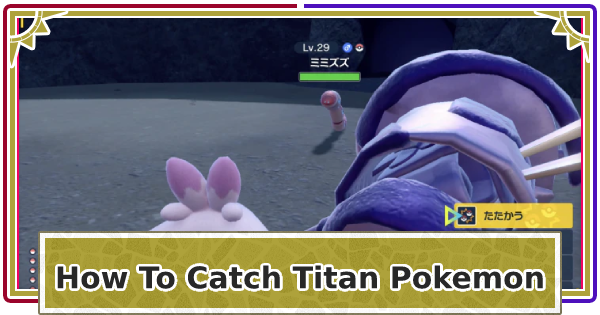 How To Catch Titan Pokemon

First defeat the giant Titan Pokemon in the Path of Legends and collect Herba Mysticas. At this point, you can't catch them, so defeat them as usual.

After defeating the giant Titan Pokemon, go back to where they were. Normal size Titan Pokemon should have spawned nearby.

If you visit where you fought, normal sized Titan Pokemon should spawn. Unlike normal Pokemon, even if you get too close to them, battle will not start, so it should be easy to identify. Talking to them will trigger battle so get ready beforehand.

Once the battle starts, you may catch them with Poke Balls just like normal wild Pokemon. Utilize Status Effects Moves to increase catching rate.

Titan Pokemon Will Not Respawn. Even If You Defeat Or Catch

Normal size Titan Pokemon will not respawn even if you defeat or catch during battle. Make sure to save the game before fighting in case you accidentally defeat the Titan Pokemon.

Can Titan Pokemon Be Rerolled?

All the Titan Pokemon has a fixed status and ability, so there is no reason to reroll.

Titan Pokemon has Fantastic Stats (U) and they are battle ready. So it is very useful for completing story missions.

Has A Speacial Mark

Titan Pokemon has a mark called "Titan Mark". The mark it self has no special power, but when Pokemon is summoned to battle it displays as 「〇〇 the Former Titan」. Catch it for collection purpose.

Titan Pokemon are bigger in size than other Pokemon. Talk to lady who measures Pokemon's size at Mesagoza to get mark for the Pokemon.