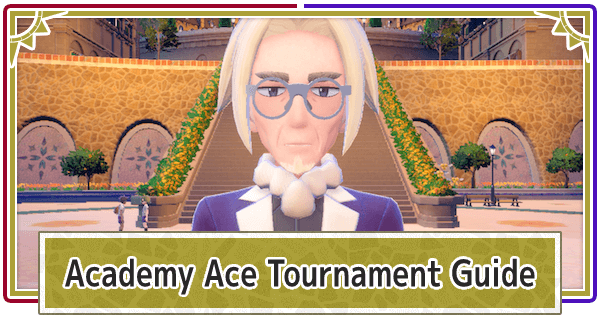 What Is Academy Ace Tournament?

How To Unlock & Requirements

▲ Can be initiated at the Academy entrance

You can unlock Academy Ace Tournament after completing the rematch from 8 gyms. The rematch can only be done during the 2nd playthrough. This tournament is challenging especially for talented trainers.

Fixed Opponents In All Battles

Only in the succeeding encounter after the gym rematch, the opponents in all four battles are fixed. The level is significantly high so prepare and raise the level of your Pokemon team before participating in the tournament.

Recover Pokemon Health Every After Battle

During the Academy Ace Tournament, the health of all Pokemon in your team gets recovered whenever you finish a battle. In addition, Terastal is also charged so do not hesitate to use it.

You Can Use Recovery Items

While this is a post-game content, it is not a battle facility so, you can use battle items and receive money & experience.

After clearing the Academy Ace Tournament for the very first time and finishing 4★ Tera Raid battle for at least 10 runs, Jacq releases the 6★ Tera Raid. The Pokemon that can be caught from 6★ Tera Raid is characterized by 5 IV or higher.

Can Also Get A Headpiece