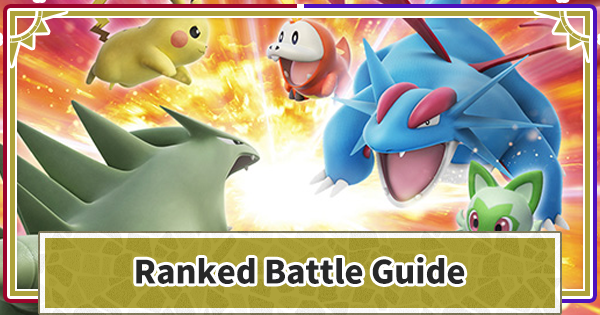 Guide for Ranked Battles in Pokemon Scarlet and Violet (Pokemon SV). See the competitive battles Series 1 and 2 dates, rules, and Pokemons that can participate and more!

The Pokemon Scarlet and Violet Series 1 will be occurring till January 31st, 2023. It will be divided into Season 1 and Season 2, and after each end of the series, you will receive a reward.

The Ranked Battle Regulation for [Series 1] Details has been posted. Will be valid till 1/31, Tuesday.

Details of the Ranked Battle Series 2 were announced. The basic rules are the same as Series 1.

Paradox Pokemon Will Be Available

In Series 2, Paradox Pokemon except Koraidon and Miraidon will be available.

How To Participate In Ranked Battle

You want to select 6 Pokemon that you are planning to use in battle and train them. Please use the article below as reference on how to Select.

Once you have finished training, you want to add them in hand, or add to Battle Team in your Box. Don't forget to give them items to hold.

Once you are all ready, Press the X Button and go to the Main Menu, and select [Poke Portal].

Once in the Poke Portal, you want to select [Battle Stadium]. If you are Offline when choosing the Battle Stadium, it will automatically turn On the Internet for you.

When you are in the Battle Stadium, select [Ranked Battle] and participate

Need To Challenge At Least Once To Receive Reward

The rules to the Ranked Battles are listed as above. If your Pokemon is under Lv 50 they will not level up so be careful.

If The Battle Time Ends, It Is By Score

If the time runs out during battle, the score of the battle will be analyzed in the order above.

What Is Ranked Battle?

A Feature That You Can Battle Against Trainers Around The World

A Ranked Battle is where you use the Online Service to battle against Trainers all around the world. Think of your strongest party and participate.