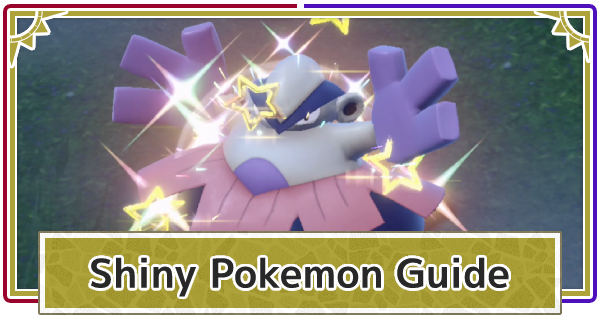 How To Get Shiny Pokemon

Rare Chance To Be Found In The Wild

Pokemon have a rare chance of being shiny when you meet them in the wold. Since Pokemon can now be seen while you walk around, you can search for Pokemon by simply walking around the field without entering a battle.

Have A Chance Of Getting A Shiny From Eggs

During the picnic, you may investigate the basket find a Pokemon egg. It's possible for a shiny Pokemon to hatch out from that egg. If you have a male and female in your team and their egg group matches, it's highly likely that you can find an egg.

How To Obtain & Hatch Eggs

How To Increase Chance To Get Shiny

Overview Of Methods To Increase Probability

Activating Sparkling Power Lv3 with the meal power of the Sandwiches increases Shiny's appearance rate by about 4 times. Note, however, that it does not affect the rate of Shiny appearing in Egg hatching.

When a certain number of Pokemon in a mass outbreak are defeated or capture, the probability rate of a shiny will increase! As long as the mass outbreak is not over, the increased rate will continue even if the area is move or the report is completed.

▲ Fuecoco from North America and China

The process of creating eggs under the supervision of an Original trainer of a different nationality is called international hatching, and the rate of appearance of shinies increases about 6 times more compared to normal hatching. Since foreign pokemon cannot be obtained with the Japanese software, have someone with an overseas version of the software exchange Pokemon with you.

How To Make Eggs

When the "Sparkling Power" effect of Sandwhich activates, depending on the level of the power, the probability of a Shiny Pokemon increases. However, this does not affect the shiny appearance when hatching an egg.

How To Make Sandwiches?

By just having the Shiny Charm in your possession, the chance of a shiny Pokemon will greatly increased. You can only obtain Shiny Charm by obtaining all 400 types of Pokemon in Paldea. After doing so, talk to Jacq at Biology Lab of Academy.

▲ Only the target Pokemon will appear if you use Encounter Power.

How To Identify And Confirm Shiny Pokemon

Its A Shiny If You Can't Beat It With Let's Go!

Using Let's Go! against Shiny Pokemon does not trigger a battle. Therefore, if you are not sure if it is Shiny, it is easiest to distinguish it with Let's Go!

You Can Check With The Mark In The Box

In the box, you can check the shiny mark by pressing +Penny to open the status screen. Use it when you want to check the Shiny Pokemon you have caught.

Starter Pokemon (When Picking Them At The Start)

When choosing from 3 starter Pokemon at the start of the game, those 3 cannot be in their shiny form. However, you can Shiny Hunt for them through breeding. If you want a shiny for the starters, you can only get them via Breeding.

Koraidon / Miraidon (During The Story)

The Legendary Pokemon that you will be friends with in the Story will not have be a shiny. However, After the Hall of Fame, at Area Zero, the second legendary that you would encounter can have a shiny form. For those who wants a shiny form, use that chance.

Check Out Shiny Pokedex And Fill It In!

The article linked below lists the Shiny appearance and location of each Pokemon. It also has a checker function that allows you to add a check on captured ones, so please use it when filling the Shiny Pokedex.

Efficient Way To Fill In Pokedex

Excess Shiny will be exchanged on the bulletin board. You can get it by talking to Jacq in the biology room at school after the comp. It is an excellent item that increases Shiny probability by about 3 times just by having it.

If you want Shiny to appear it's easiest to select them with Mass Outbreak. Head to the Mass Outbreak location on the map and look for Shiny Pokemon with the Sparkling Power Lv3 activated from Sandwhich.

If you can update, continue to select Shiny in Mass Outbreak.

When the number of unhatched Shinies in the Pokedex is getting low, it will be difficult to target the Mass Outbreak you are looking for due to the change in main time, so switch to hatching selection using international hatching. International hatching can be easily done by exchanging foreign Dittos on the Ditto exchange bulletin board.

Paradox Pokemon can't Mass Outbreak and can't produce Eggs, so you can only normally pick Shiny Pokemon in the wild. Make sure to eat Sandwich of Sparkling Power Lv3 (activate Encounter Power Lv3 at the same time) and choose carefully.

What Is A Shiny Pokemon?

A Form Of Pokemon That Has A Low Chance Of Appearing

▲The normal color is Black but at Shiny form, it is pink.

Shiny Pokemon are forms that has different color compared to its usual looks. It is usually called "Shiny" and it is one of the biggest collectibles in Pokemon games.

Shiny Pokemon does not give an advantage in battle as compared to its normal form. However, Shiny Pokemon has special star animation that happens once it leaves the Pokeball making it a great Collectible for fans.

Koraidon / Miraidon are Shiny locked, its not true...u cant Capture a shiny form