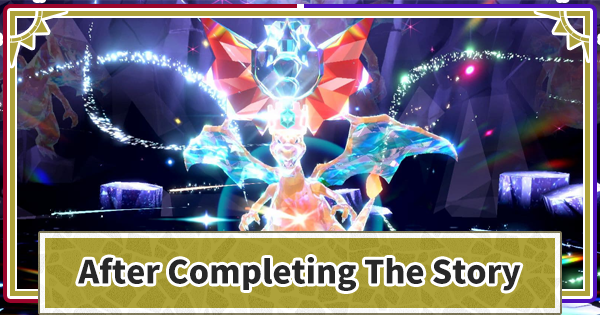 Completion Guide for Pokemon Scarlet & Violet (SV). See what you can do after you complete the game, Academy Ace Tournament, Team Star's Rechallenge, STC, and Completing your Pokedex.

Things To Do After Clearing The Game

Steps To Be Done After The Ending

After completing the "The Way Home" and finished watching the Ending, there will be features that will unlock. There are some things that unlock right after the ending, but the Academy Ace Tournament or High Difficulty Terra Raid will not be unlocked unless you complete a few steps. If you want to play the Pokemon Scarlet & Violet for the fullest, then don't let your guard down and enjoy the last few steps!

You will be back in your dorm after the Ending. There will be an announcement calling you to the Director's Room. When you arrive, an event will start, and will be given a Master Ball.

After speaking to Geeta in the Director's room, re-challenge all the Gym Leaders. Post Game the levels and the Pokemon will change, so level up your Pokemon appropriately.

After defeating the Gym Leaders again, speak to Greeta again in front of the Academy's entrance.

After speaking to Greeta , you may enter the Academy Ace Tournament. Speak to the receptionist at the entrance and join. All your opponents will be at Lv 70, which is very high so its recommended to level up appropriately.

Once you defeat Greeta, you will be able to enter the Academy Ace Tournament once again. After your first challenge, the tournament's opponents will be chosen at random. You will also unlock the High Difficulty Terra Raids as well so you will be able to farm Individual Values.

After first completion, you will get a hat

After the Ending, go to each Team Star's Base, and in fron of the tent you can speak to the Boss. The icon that was there before Completion will be deleted. Look at the map and see where they are.

Once you talk to the Boss, you may battle with them again. Their Pokemon and their levels have changed so level up appropriately. They will not use the Star Mobile so it will be a normal Pokemon battle.

Once the day changes, you may challenge again

You may challenge a Team Star's boss ONCE a day. You may not consecutively challenge them so make sure to challenge every day.

After the Ending, your Koraidon or Miraidon will change their forms into Battle Form and you will be able to use them for Pokemon Battles. But you will use this Koraidon/Miraidon for riding so you would want to capture another one that is hiding in the deep of Area Zero and use that for Pokemon Battle.

▶How To Get Koraidon

▶How To Get Miraidon

After the Ending you will be able to go into Area Zero freely. In this area, there are Paradox Style (Ancient/Future) Pokemon and you do not have them so you want to capture them.

Around the map, You can challenge them before the Completion, but they are Lv 60 and very strong so it is recommended to level up your Pokemon and challenge them when you are ready.

Scarlet & Violet have their own limited Pokemon so if you only have 1 type of version, you will not be able to fill up your Pokedex. Buying 2 different versions and playing by yourself will take too much time, so you may want to use the Trading Forum and be able to gather the Pokemon that you need and missing.

The traditional Pokémon feature of "Shiny Pokemons" is also present in this game as well. With a very rare possibility, you will be able to get different colored "Shiny Pokemon". The powers do not change, so this is a neat way to add new Pokemon to your collection.