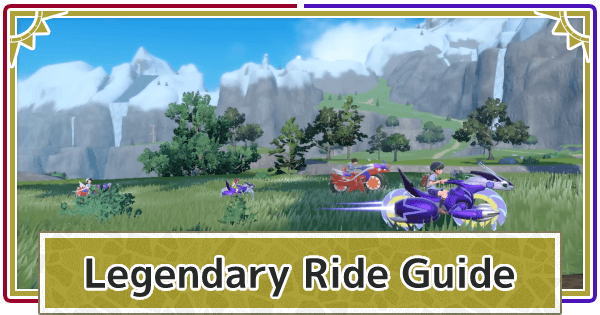 Legendary Ride Guide for Pokemon Scarlet & Violet (SV). See how to do use it, different modes for Legendary Ride, Koraidon & Miraidon, & how to unlock/upgrade.

Legendary Ride Glide - How To Unlock/Upgrade?

Unlock The Legendary Ride Through Progress of Story

Once you step inside the school grounds, proceed with the game story until you are able to start playing freely and the Legendary Ride function will be unlocked. Note that you can only use the Sprinting Build or Drive Mode in the Early Stages.

Walkthrough Chart On How To Unlock The Legendary Ride

The more Titan Pokemons you defeat, the more you can do when using the Legendary Ride. You can defeat these Titans according to your liking since there are no rules regarding the order. Their functions will also be released according to the Titan Pokemon you have defeated.

Koraidon/Miraidon will take the form of a bicycle/motorcycle-like feature and they will be able to move at high speeds like the bicycles same as in the previous games. Also, by defeating certain Titan Pokemons, additional features will be added.

After defeating the Stony Cliff Titan (Klawf) Dash skill will be available. This move will allow you to move faster by holding down the L-stick. If you hit a tree during the Dash, you will encounter a Pokemon and it will trigger a battle.

After defeating the Lurking Steel Titan (Orthworm), the Jump High will be available. Press and hold B to make a larger jump than usual. This function can be used when you want to jump to a higher place or jump further.

Moving Across The Water

After defeating the Open Sky Titan, the Move Across Water will be available. This function is used when you want to cross oceans, and rivers, or when you want to get closer to those Pokemon that are located in the water. If you have already acquired Dash by defeating Stony Cliff Titan, you can use it while moving across the water as well.

Glide (In The Air)

When the False Dragon Titan is defeated, you can use the feature of the rider to climb higher areas or surfaces. This allows you to climb up places that seem to be dead-ends due to cliffs. You will also be able to go to places that were difficult to reach before.

the Open Sky Titan unlocked water travel for me.