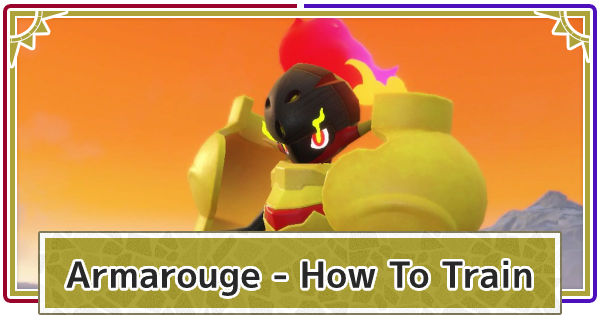 How to get Armarouge Build For Raid Guide in Pokemon Scarlet and Violet (Pokemon SV). See how to train Weak Armor, Effort Values, recommended skills, and what to bring.

Armarouge is a Special Attacker that can use Flash Fire to disable Fire-type moves. However, Armarouge has no moves that can recover and heal itself, so it is highly recommended that you equip it with Shell Bell or cheer with Heal up! to help it regain any lost HP.

The Armorouge is likely to be useful in the Raid Battle against Cinderace in the 7 Star Raid Event. It can still attack while avoiding Cinderace's main weapon which can attack weaknesses Psychic moves while keeping Fire and Fighting moves at or below half strength.

How To Train Armarouge For Raids

How To Train & Strengthen Armarouge

Armarouge is limited to Scarlet and only appears in Tera Raid 5 and 6, so catch Charcadet before it evolves if you do not have it. Charcadets usually appears in a wide area, but the probability of their appearance is low, so it is recommended to activate Encounter Power when they do not appear easily.

Reroll Or Breed If You Want To Save Money

Eventually, you will need to use items to raise Charcadet and evolve. If you want to save money, reroll or breed since buying various items can be costly. In addition, the Nature of each Pokemon differs thus it is recommended to reroll or breed.

How To Get Strong Pokemon

When Bronzor is defeated or captured, a piece of Bronzor can be obtained. You can also get them by defeating them with Let's Go! Basically, it is recommended that you look for them in habitat location above and gather them in the Mass Outbreak if you have it.

When preparing Armorouge to be used in raids, make sure to change its ability from Weak Armor to Flash Fire. However,it is a waste of time and money in reverting from its Normal Ability to its Hidden Ability, so it is recommended to have a spare Charcadet with Flash Fire unless you have an excess of Ability Patches at hand.

If a wild Charcadet is caught or hatched, the Tera Type will always be the Fire type. Even when obtained through raids, the Tera Type will not become Psychic unless you draw it though its probability is as low as 1/18, so use 50 Tera Shard (Psychic) to change it to Psychic.

Can Be Changed In Medali's Treasure Eatery

Tera Type can be changed by going to Treasure Eatery in Medali. Enter the restaurant and talk to the NPC in the kitchen. You can't use it unless you've cleared the Medali Gym, so if you haven't already, make sure to do so.

Modest Mint can be used to turn Nature into Modest. If you don't have one, go to Chansey Supply in Mesagoza or elsewhere and buy one for 2,000 Poke Dollars. There is no need to use Mints if the original Nature is Modest.

Add 252 to HP and Sp.Attack to balance its firepower and provide consistency on its damage. Defense is recommended for the rest.

If you can afford it, the fastest way is to buy Vitamins in bulk to raise the Effort Value. However, it costs 10,000 Poke Dollars each piece, to boost it to 1 stat approximately 26 pieces may be used while roughly 50 pieces (500,000 Poke Dollar) are necessary to raise all stats to the maximum.

By catching or defeating Wild Pokemon, you can earn 1-3 Effort Value. If a Power Item is given, it is also possible to increase the Effort Value gained by 8. Power Item costs only 10,000 Poke Dollars each and is recommended for those who want to save money.

You can get Exp. Candy L and Exp. Candy XL by clearing 5-6★ Tera Raids. Because it is most effective to level up a single Pokemon, it is recommended that you work on your Pokemon team one at a time.

Perform Hyper Training using the Bottle Cap and maximize the Individual Values other than Attack. Hyper Training can be done by talking to the NPC behind the Pokemon Center in Montenevera.

Where To Perform Hyper Training

Best Moves To Get For Armarouge

Armarouge's main firepower move Psychic is fixed and the other moves are free slots. Iron Defense and Will-O-Wisp can only be used to Armarouge's advantage if the opponent is a Pokemon that uses Physical Attack moves, It is recommended to adjust the combination of moves according to your opponent.

How To Use It In Raid Battles

Since Armarouge does not have any moves that can recover its HP, it is recommended to equip it with Shell Bell to increase its survivability in battle.

Once the battle begins, make sure to use buff to boost Armarouge's stats, debuff the enemies moves and further inflict them with Status Moves to make it easier to deal damage and increase your survivability in battle. It is also important to use Cheer to support your Pokemon Team when HP is low or when you have finished using buff or debuff moves.