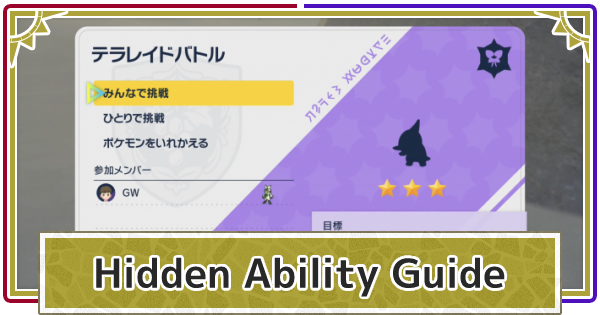 Hidden Ability - How To Get

Pokemon caught in Tera Raid Battles with 3 or more stars may get a chance to get the Ability they want. The more badges you have, the more likely you will get Tera Raid battles of higher quality. At 5 Badges, 3 Star Raids start to appear.

After clearing the school's Academy Ace Tournament, you will be told that powerful Tera Raid have been confirmed in various locations. Pokemon with high IV and better abilities are more likely to appear.

Academy Ace Tournament Guide - How To Unlock & Best Pokemon To Use

Obtained By Inheriting From Thier Parent From Egg Hatching

If you make an egg with a hidden ability, there's a chance that the offspring Pokemon will get a Hidden Ability. Note that you do need to have a correct Pokemon combination to get the Hidden Ability.

▼ Combinations Where Hidden Ability Is Inherited

How To Obtain & Hatch Eggs

If you the Ability Patch on a normal ability Pokemon, you can change it to a Hidden Ability. This can only be obtained as a low-rate reward for 6-star Tera Raids.

Get It From Trading From Someone

If there are people around with Pokemon with Hidden Ability, you can ask them to trade you for any extra Pokemon they may have. If not, you can try to recruit them on the Pokemon Exchange Board.

If Hidden Ability♂ Is From The Original Trainer

If The Hidden Ability♀ Is From The Original Trainer

Ditto & The Pokemon With Ability Is The Original Trainer

What Is Hidden Ability?

Hidden Ability Is Only Available Under Special Conditions