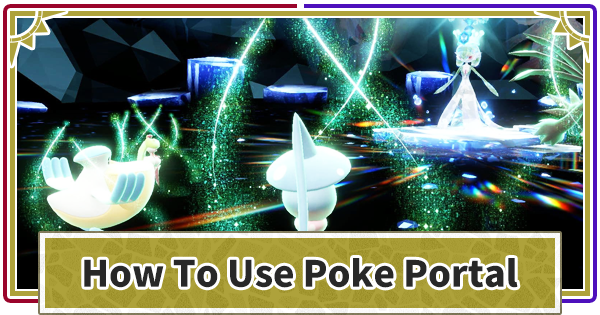 Poke Portal Guide for Pokemon Scarlet and Violet (Pokemon SV). See uses of Poke Portal, features, what can you do, what is Poke Portal, online competitions & more for Poke Portal.

What Is The Poke Portal?

Online Communication Tool With Trainers Around The World

*You will be redirected to the Official Nintendo Website.

Free for Nearby Exchanges

When exchanging with someone near you, you do not need to subscribe to "Nintendo Switch Online" for the Poke Portal and just use the local service .

Poke Portal is NOT Available For Past Games

Poke Portal is not available in the games up to the Eighth Generation (Sword and Shield). To exchange Pokemon from past games to this generation (Scarlet & Violet), you must wait for the implementation of Pokemon HOME to do this.

What Can You Do With The Poke Portal

Pokemon can be traded between Trainers across the country using the Internet through the Poke Portal. If both parties agree to show their Pokemon to be traded to each other, the trade is completed.

As in the previous games, Surprise Trades of Pokemon is also possible. Since it is impossible to know which Pokemon will be coming, it is often used to fill up your Pokedex or to send excess hatched eggs obtained from breeding.

You may also use this service to compete with Trainers from around the world using the Internet. Since there is an addition to the Ranked Battles and Casual Battles, there might be special rules that will be added as needed.

Tera Raid Battles can be played by up to four people. Tera Raid is a new battle system, and all the Trainers should work together to finish the battle.

Terastal Guide & How To Terastallize

A new feature has been implemented in the Pokemon Scarlet & Violet. Up to four people can join the adventure in the same field. You can show your Pokemon to each other and have more freedom playing together.

Picnics can also be played by 4 people.

With the Union Circle, picnics can also be played with four people. Everyone can take pictures together and Pokemon eggs can also be found while your Pokemon and other trainers' Pokemon are playing.