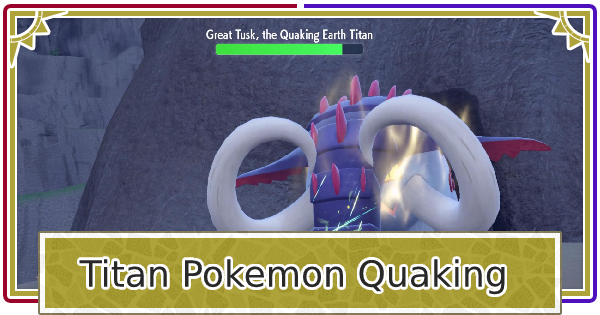 Quaking Earth Titan (Great Tusk) is a Titan Pokemon in Pokemon Scarlet and Violet (Pokemon SV). Read on to learn more about its weakness, map location and how to unlock glide move.

Use Water And Grass Types

Quaking Earth Titan is a Ground/Fighting type, so it has six weaknesses: Water, Grass, Ice, Flying, Psychic and Fairy types. We also recommend Wenibal and Mascaña from the Gosanke, and Floatzel, which can be evolved from Buizel, which can be which can be captured in West Province (Area Two) near Titan Pokemon.

Winning the second battle will allow the Titan Pokemon to be defeated, releasing the Legendary Ride technique Glide.

Once the Quaking Earth Titan is defeated, it is possible to explore using Glide from a height. Note, however, that because of the gradual decrease in altitude, Glide does not allow the user to fly freely to a higher altitude than the current point.