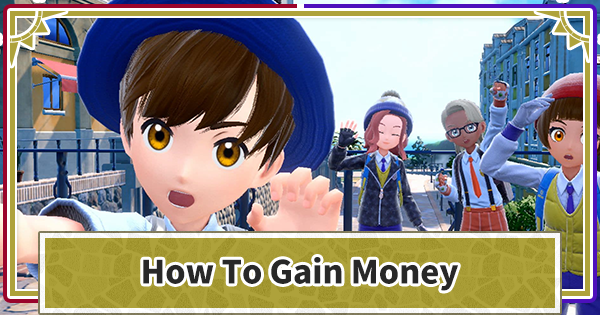 How to Farm for Money Guide in Pokemon Scarlet & Violet (SV). See the best and fastest way to farm money and how to use the money

Currently, the best way to farm money is competing in the "Academy Ace Tournament". If you have the right party and levels, the battles can be finished in a short period. If you also have the Amulet Coin, you can finish the Tournament (around 10 min) and receive the reward around $ 120,000 to $ 130,000 in a short period of time.

Level up a Pokemon that is strong enough that when you are Terra Form, all you have to do is press the A Button. If you have 1 Pokemon in your party, then you can avoid [Switch Pokemon] option and can just press the A Button. Even though you might have Critical Hits or some accidents, but it is a very easy way to farm money.

Pokemon Recommended To Farm Money With

If you complete a Star 5 or more Terra Raid, there is a chance to receive a money reward. If you complete a good amount of raids, you will have farmed a lot of money. When the raids are Star 6, you will get a good amount of reward items as well as items that are useful to get your stats up. Choosing the right Pokemon to level up is very important.

Post Game, you will be able to battle again the Team Star's Bosses, Giacomo and the others at their base. You may only battle ONCE a day. But if you have the Amulet Coin, after defeating all 5, you can gain about $ 100,000 in rewards in total.

Picking Up Shiny Things From The Map

A part of Shiny Things dropped round the routes could be exchanged for money. It is not a guaranteed amount but if you were to find the Shiny Items, you might want to pick it up and you might have a good amount in the end. So don't miss out on the items that you can pick up.

▲The Asado Desert has a lot of Shiny Things and it might be a good place to gather a good amount of money in the Beginning of the Game.

You want a Pokemon to be holding the "Amulet Coin" and when you battle a Trainer, you will get a good amount of reward money. You can get it in Medali Town in a short period time, so give it to your Pokemon around Lv 30 and start battling Trainers and collect a lot of money from the start.

Where To Get The Amulet Coin

Near the Pokemon Center East of Medali, there is a man who will give you the Amulet Coin. After defeating the 5 Trainers in the West Province (Area Three) area, go talk to him.

Medicine and Badges, Mints for increasing Effort Values, you would need a good amount of money to buy these items and use them on various Pokemons. Using items to increase these Effort Values are much more faster and it will help you speed up the progress. It will also reduce your mental stress from all the level ups, so it is very recommended to farm a lot of money.

You can purchase special and fancy Poke Balls to use for special occasions. You can get a lot of these fancy balls in Porto Marinada, but there are some that as expensive as $ 100,000 so you might want to be ready to pay for these items.

If you want to buy costumes in-game, you would want to have a good amount of money to purchase these. Just to have money to buy items is always good to have.