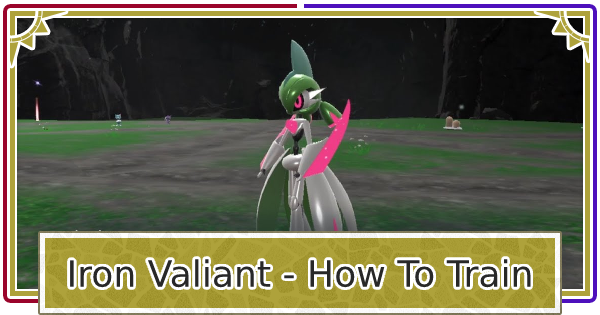 How to train Iron Valiant Build For Raid Guide in Pokemon Scarlet and Violet (Pokemon SV). See how to train, best moveset, Effort Values, recommended skills and what to bring.

Iron Valiant is a supporter who, due to his high speed, puts up two barriers, Reflect and Light Screen, to reduce damage to allies. Base Stats themselves can participate in attacks because they are more than attackers.

Active In All High Difficulty Raid

In addition to the role of putting up walls, they can also interfere by Taunt. Since support is the main focus, the remaining three attackers should be solidified to take up the challenge of Raid.

How To Train Iron Valiant For Raids

How To Get To The Hidden Area

Reroll If You Want To Save Money

Once Iron Valiant is prepared, make sure to use items to raise them into an ideal individual Pokemon. Each item costs money, so if you want to save even a little money, it is recommended to carefully select its Nature, Individual Value, and Ability.

Mints can be used to change the Nature correction for increased speed. If you don't have it, go to Chansey Supply in Mesagoza or other places and buy one for $ 2,000.

However, If the original Nature is Timid or Jolly, there is no need to use Mints.

Mints - Effects & How To Get

Swords Dance + Drain Punch can also provide a means of recovering HP. Change Nature to Adamant to be more of an attacker.

It is recommended to raise off HP and Speed so that you can act as much as possible. If you want to improve your own attack performance, you can turn from HP to suicide or attack according to the technique you use.

If you can afford it, the fastest way to shake it is with the above Vitamin. Although a total of about $ 500,000 is required, it can be changed out in a more time-efficient manner.

Vitamins - How To Get & Uses

Get Money From Winning Battles

By capturing or destroying wild Pokemon, you can earn 1-3 Effort Value. If a Power Item is given, it is also possible to increase the Effort Value gained by 8.Power Item costs only 10,000 yen each and is recommended for those who want to save money.

If you clear the 5 or 6 star Tera Raid, you can get Exp. Candy L or Exp Candy XL. Leveling up is the most efficient when training a single Pokemon.

If you do not have enough candies to raise a Pokemon to Lv 100, it is recommended to hunt for Chansey at North Province Area Three until you get sufficient candies.

Perform Hyper Training with Bottle Cap to raise Individual Value to the highest except for Special Attack and Agility. The Hyper Training can be obtained by talking to the NPC behind the Pokemon Center in Montenevera.

Where To Buy Bottle Caps

Since support will be the main focus, Reflect, Light Screen, and Taunt will be finalized. For attack moves, learn Moonblast to deal consistent special attacks damage and Close Combat to deliver physical damage for firepower while ignoring recoil.

If firepower is important, use Swords Dance + Drain Punch to provide firepower while maintaining stability. If you want to be more of an attacker then consider this combination.

How To Use Iron Valiant In Raids

Iron Valiant's main role is to put up protective barriers Equipping Light Clay is a must when playing defensively to protect allies because it extends the duration of the move barriers' effects.

First, put up Reflect and Light Screen to reduce the damage your allies take. Whether to use the Physical/Special attack move depends on the Pokemon, so choose the move that best fits the situation, or use both moves.

If the opposing Pokemon uses a move that inflicts status conditon, it can be prevented by using Taunt. Use it according to your opponent's Pokemon.

After completing the support, join in with an attack technique yourself. Status moves such as Reflect end their effects after a turn. When the effect wears off, use the move again to be able keep supporting your allies.