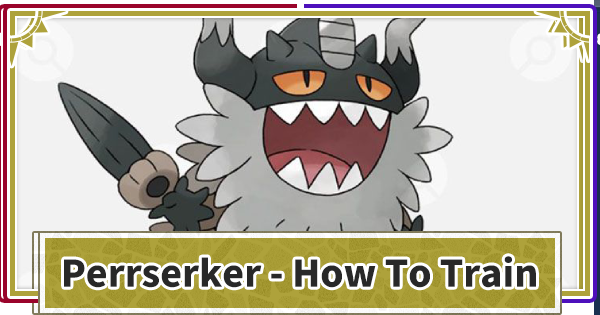 How to train Perrserker Build For Raid Guide in Pokemon Scarlet and Violet (Pokemon SV). See how to know Steely Spirit, Effort Values, recommended skills and what to bring.

High Damage When There Are 4 Perrserkers In Raid

When four Perrserker are in the raid party, the effect of Perrserker's Hidden Ability [Steely Spirit] increases the power of Steel Moves by nearly five times. Additionally, it can provide excellent support with Moves like Screech, Taunt, and Helping Hand.

Great In Raid Wherein Steel Is Strong Or Neutral

Thanks to it's high damage and excellent support, you can quickly go through Raids wherein Steel type is not weak to. Note that the four Pokemon must be lined up so it's necessary to communicate and talk before the Raid.

Perrserker - How To Train For Raids

Perrserker's pre-evolution Galarian Meowth does not appear and cannot be caught in the world. You will need to complete all of teacher Salvatore's events (will require at least 7 Gym Badges) to get it. Since the Galarian Meowth you get may only get a Normal Ability, you must use an item later to change it to a Hidden Ability.

How To Complete Salvatore's Teacher Events

Trade With Other Players

Since it's a bit troublesome to change a normal Ability to a Hidden Ability. You can also ask someone else to trade you a Galarian Meowth or Perrserker. Use the trade board to find someone who is willing to trade.

Reroll IVs If You Want To Save Money

After this, you will have to use various items to make Perrserker into a stronger Pokemon. Since each item costs money, if you want to save some money, give the Everstone to Galarian Meowth with the Hidden Ability and reroll its IV until you get the ideal stats.

How To Get Strong Pokemon - Breed Best Stats Guide

Hidden Ability Guide - How To Get & Breed Combinations

You can change the Nature to Adamant using the corresponding Mint for it. If you do not have one, get it from the Chansey Supply Shop in Mesagoza or other areas for 20,000 Pokedollars. If the original Nature is Adamant, there is no need to use Mints.

Nature Guide - How To Change & Choose

Distribute 252 to Perrserker's ATK to raise its damage, also distribute 252 to HP to ensure durability. The extra 4 could be used for DEF, but it's fine to use it on either Sp. Defense or Speed.

If You Can Afford It, Faster To Increase EV With Items

If you can afford it, the fastest way is to use the Vitamins above. You will need about 500,000 Pokedollars in total. However, it will save you time.

Vitamins are available at the Chansey Supply Shop, while Feathers can be found around Casseroya Lake and at auctions in Porto Marinada.

By capturing or defeating Wild Pokemon, you can earn 1 to 3 Effort Value for each of them.

If you give a Pokemon a Power Item, you can increase the amount of Effort Value it gets by 8. Power Items costs only 10,000 Pokedollars, so they are recommended for those who want to save money.

Clear 5-star or 6-star Tera Raids to get Exp. Candy L & Exp. Candy XL. This is the best way to train one Pokemon.

Use the Bottle Cap to raise the Individual Value to the highest except for the Sp. ATK. You can purchase this from the NPC behind the Pokemon Center in Montenevera.

Bottle Cap Guide - How To Get

Places Where You Can Find Bottle Cap

This move list is recommended because each of them has their own role: Iron Head for attack, Screech & Taunt for debuffs, and Helping Hand for support.

How To Use Perrserker In Raids

When taking on a raid with four Perrserkers, it is common to divide them into three supports and 1 attacker. The objective to concentrate the damage to the Attacker, and to defeat it with a single hit. The items to carry and the way to move around depend on the role, so keep this in mind.

The most import thing for Supports is to use Screech to lower the opponent's Defense.

The hit rate is 85%, so be sure to give it to the support to help with the accuracy.

If the attacker is not likely to be able to defeat the attacker with a single attack, the three support players will reinforce the attacker's firepower with Helping Hand. Each use will increase damage by 1.5x, making it easier to one-shot an enemy with Iron Head.

Choice Band and Metal Coat should be used according to the opponent. Choice Band is the best choice since it increases the damage of Iron head, while Metal Coat is best when you want to block Status Moves with Taunt.

Unlike the Support role, the Attacker's move changes depending on the opponent. Choose which to use as described above.

If you get to the second turn, attack with Iron Head after the supports use Helping Hand.