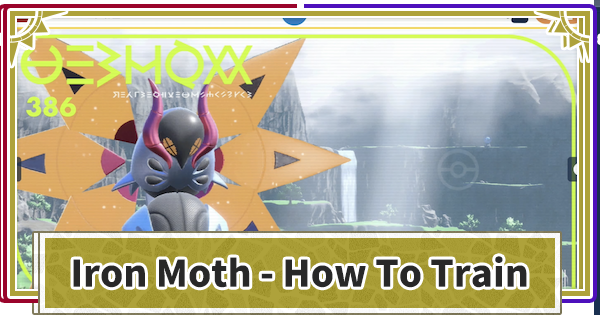 How to train Iron Moth Build For Raid Guide in Pokemon Scarlet and Violet (Pokemon SV). See how to know Acid Spray, Effort Values, recommended skills and what to bring.

Special Attacker Who Makes Full Use Of Ability Change

Iron Moth, lowers the Special Defense of its opponent by using [Acid Spray] and increases its own Special Attack with [Fiery Dance] so it is a Special Attacker that changes stats while attacking.

Can Be Useful Against Higher Difficulty Fire/Poison Weak Raids

By using the [Acid Spray] it will certainly decrease the Special Defense, and it is effective even when the enemy put up a barrier. It is especially effective against the Tera Raids which are weak to Fire or Poison type.

Use Morning Sun For Healing

[Morning Sun] is a Healing Move, so Iron Moth can keep HP just by itself. It is the perfect Pokemon since it is a complete set.

How To Train For Raids

How To Reroll/Train Iron Moth

Iron Moth is a [Violet] Exclusive Pokemon. It appears in Area Zero, and can be found near the Observation Area 1 in the [Violet] ver. If you have [Scarlet] you can trade it with friends or with someone on the Trading Forum.

If You Want To Save Money, It Will Be A Little Hard

Once you have Iron Moth prepared, you have to use items to raise its IVs. Each item will cost you a lot of money and since you can only get Iron Moth by capturing it, it will be hard to reroll its [Nature] and [IV]. If you do not have money, be careful.

▶How To Reroll Strong Pokemon

You can change the Nature to Modest using the corresponding Mint for it. If you do not have one, get it from the Chansey Supply Shop in Mesagoza or other areas for $ 20,000. If the original Nature is Modest, there is no need to use Mints.

Complete 5-star or 6-star Tera Raids to get Exp. Candy L & Exp. Candy XL This is the best way to train one Pokemon.

▶How To Level Up Fast - EXP Farming

The recommended move list is listed above. Since it can be fulfilled with 4 moves and be self-sufficient, it is very useful if you participate in a Solo Raid.

How To Use For Raids

The recommended item you want to make it hold, is the Booster Energy, which powers up your attack power from the beginning. If you want it to hold something else, learn [Electric Terrain], which will activate your Ability.

First, use the Acid Spray to lower your opponent's Sp. DEF. If the opponent doesn't cancel the effect, you can lower its Sp. DEF to the maximum of 6 levels using the Acid Spray 3 times.

Once you have lowered the Sp. DEF, target the weakness and use Sludge Wave or Fiery Dance to attack. Fiery Dance also will raise your Sp. ATK by 50% so you can attack with a good amount of Attack Power.