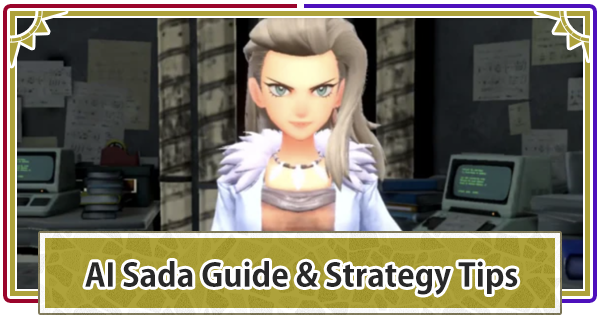 Unlock four doors in Area Zero in order to unlock the entrance to the Zero Lab.

A story event will start once you start talking to Professor Sada. She will reveal everything about how she's not the real Professor and state that she is just an AI imbued in Prof. Sada's body.

After reaching the far end of the Zero Lab, AI Sada will instruct you to insert the Scarlet Book into the central. AI Sada also warns you that you will automatically start a battle with her, so be prepared for the challenge.

Recommended To Use Fairy/Ice/Steel Types

AI Sada uses multiple types of Pokemons, and it will be quite difficult if you only use one type of Pokemon during the battle. It is highly recommended that you use a Fairy, Ice, or Steel type of Pokemon as they have an advantage against AI Sada's Pokemon team. Try to make her team vulnerable by remembering their techniques before the battle starts.

Roaring Moon will use its Booster Energy to have a huge advantage during the battle. Use a Fairy-type pokemon to attack its weaknesses since this type inflicts 4x the damage.

Second Round - Battle With Koraidon

Koraidon Battle Is A Must-Win Battle

There will be a second round after defeating AI Sada, but this time it will be a Koraidon battle. In this round, there is an assurance that you can always win regardless if you don't use Endure, you can still hold on to your 1x HP and after making turns, you will automatically activate Tera Burst in order to win the battle.

In the second round against Koraidon, you will not be able to use normal Pokemon, instead choose Koraidon for this battle.

Once Penny asked you to hold back during that time you are still deciding to use a technique of your liking, and if you proceed on choosing Endure, your attack will be greatly enhanced.

During the battle, Penny will prompt that your Tera Orb is glowing, and after that, your Koraidon will activate its Terasatal enhancing its attack and defense.

Once Koraidon's Terasatal is activated, use Tera Burst to hit your opponent's weak points and inflict massive damage.