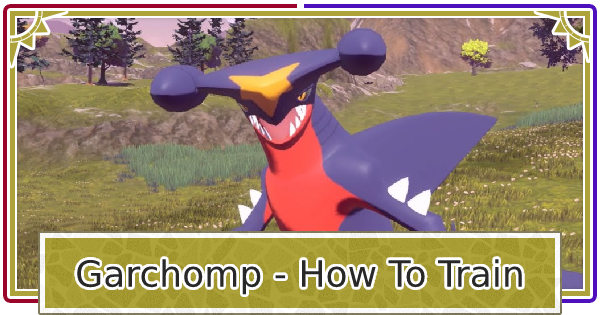 How to train Garchomp Build for Tera Raid in Pokemon Scarlet and Violet (Pokemon SV). See how to train for Tera Raids, recommended Effort Values and skills plus what to bring.

It has a high Attack Base Stats and Earthquake is a very powerful attack move, making it a valuable Ground Attacker that can take down Electric Type Pokemon.

It can use the high-strength Earthquake as a Same-type attack bonus and Swords Dance to increase its own Attack power. Earthquake is a great move and reaches a large range, but it does not effect your allies.

Other Than Electric Type, Your Other Pokemon Will Do

It works well for Dragon type, but it is better to take on Dragon types with Fairy type. Keep in mind that Garchomp's role is mainly for Electric-type, which other Pokemon are hard to go up against.

Garchomp has a 4x weakness to Ice type, and in a 6-Star Raid, you will faint from a Single Punch blow. Even if it is Electric Tera Type, you should avoid Ice-type Pokemon.

How To Train Garchomp For Raids

First you need to catch Garchomp or pre-evolved Gible. Ground type is preferred for Tera Types, so you can be breed them or catch them in the wild.

Hidden Ability Can Be Compromised

Garchomp's Hidden Ability is called Rough Skin, which reduces the opponent's HP when hit by Physical moves. However, it is not effective in Raid battles, so it is not worth using Ability Patch. If you have other Pokemon you want to raise, you can compromise on its ability with Sand Veil.

How To Change & Reroll

Adamant Mint can be used to turn Nature into Adamant. If you don't have one, go to Chansey Supply in Mesagoza or other towns and buy one for 20,000 PokedollarsYou do not need to use Mints if the original Nature is Adamant already

You should assign an Effort Value of at least 252 to Attack and 252 on its HP to increase attacker performance and durability of Garchomp. The extra 4 is assigned to Defense, but you can assign it to Sp. Defense or Speed.

Use Items To Increase Effort Value

If you can afford it, the fastest way is to purchase the above Vitamin at Chansey Supply. Although a total of about 500,000 Poke Dollars is required, it can be changed out in a more time-efficient manner.

Battle Wild Pokemon If You Want To Save Money

By catching or destroying wild Pokemon, you can earn 1-3 Effort Value. If a Power Item is given, it is also possible to increase the Effort Value gained by 8. Power items cost only 10,000 Pokedollars each and are recommended for those who want to save money.

If the appearance location image is not displayed, click to enlarge it.

You can get Exp. Candy L or Exp Candy XL if you clear the 5 or 6 star Tera Raid. Leveling up is the most efficient when training a single Pokemon.

Use the Bottle Caps for Hyper Training to raise Individual Value to the highest except for Attack. Hyper Training can be done by talking to the NPC behind the Pokemon Center in Montenevera.

Garchomp is used in the Raid mainly for the power of Earthquake and Swords Dance to boost its Stats. The remaining two slots are free slots and recommend Bulldoze as a backup in case Earthquake runs out of PP or you will not be able to use Garchomp.

How To Use Garchomp In Raids

Garchomp should be holding Soft Sand to get a stronger Attack power with Ground moves. Choice Band is not useful because it uses only two moves, Swords Dance and Earthquake.

To increase the power for a single shot, use Swords Dance three times first. If your allies are cheering "Go All Out!" then you can increase your Attack power to 6 levels.

When Garchomp is enhanced, wait for your ally to lower the defense of the opponent. In the meantime, you can use Hang Tough! or Heal Up!. When the defense has been lowered, attack with Earthquake to reduce the enemy's HP in a big blow.

Recommend also using a Shell Bell for some form of healing. Because you're usually only choosing Garchomp when it is super effective, with a Sword Dance boost the healing from Shell Bell really adds up.