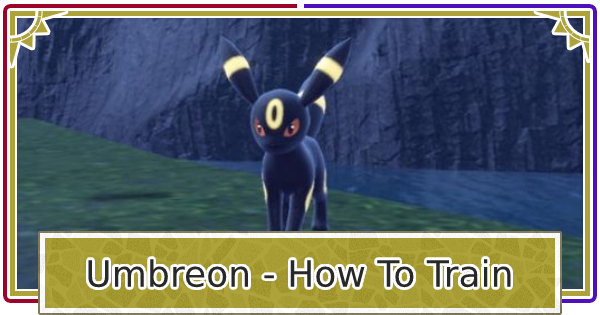 How to train Umbreon build for Tera Raid in Pokemon Scarlet and Violet (Pokemon SV). See how to learn Fake Tears, increase Effort Values, recommended moves & abilities, and what to bring.

Support Type That Can Cover Weakness And Attack Power

Umbreon has very high defense with 110 Defense and 130 Sp. Defense. Having both the debuff for Defense and Special Defense makes Umbreon suitable in many situation.

Taunt is very effective against Pokemon that uses Status Move such as Spore and Dragon Dance.

How To Train Umbreon For Raids

Both Umbreon and Eevee spawns in the wild. *Umbreon only spawn during the night. In order to evolve Eevee to Umbreon, you will need enough Friendship and level up during the night without having Fairy type moves.

Dark Tera Type Can Be Found Inside Alfornada Cavern

You can find Umbreon at Alfornada Cavern, West of Alfornada. There are no specific Tera Type that you need to find, but it is recommended to get the same Dark Tera Type to gain Same-type attack bonus.

Be Selective If You Want To Save Money

Once Umbreon is prepared, make sure to use items to raise them into an ideal individual Pokemon. Each item costs money, so if you want to save even a little money, it is recommended to carefully select its Nature, Individual Value, and Ability.

Both Abilities Are Useful

Both the Normal and Hidden Ability can be useful in many situations, so it is not recommended to use Ability Patch to change the ability.

With Calm Mint, you can turn it into Calm with some Nature correction. If you don't have it, go to Chansey Supply in Mesagoza or other places and buy one for 20,000 Pokedollars. However, there is no need to use Mints if the original Nature is Calm.

The fastest way is to use the above Vitamins to change its value if you can afford it. Although a total of about 500,000 Pokedollars is required, it can be changed out in a more time-efficient manner.

Vitamins are also available at Chansey Supply and Feathers are available as Sparkling droppings near Casseroya Lake.

Vitamins - How To Get & Uses

By capturing or destroying wild Pokemon, you can earn 1-3 Effort Value. If a Power Item is given, it is also possible to increase the Effort Value gained by 8. Power Item costs only 10,000 Pokedollars each and is recommended for those who want to save money.

If you clear the 5 or 6 star Tera Raid, you can get Exp. Candy L or Exp Candy XL. Leveling up is the most efficient when training a single Pokemon.

Perform Hyper Training with Bottle Cap to raise Individual Value to the highest except for Special Attack and Agility. The Hyper Training can be done by talking to the NPC behind the Pokemon Center in Montenevera.

Bottle Cap Guide - How To Get

Moves like Fake Tears and Taunt greatly increases the effectiveness of Physical and Special Attackers. Use Helping Hand to buff Allies after Debuffing the opponent is effective as well.

How to Use Umbreon in Raid

As for items, Wide Lens is recommended to carry to cover the accuracy of Screech. If you are uncertain of Screech's debuffs, you can use Sitrus Berry instead or other items, but take note of the large disadvantage when they are removed.

If the enemy is a Pokemon that is likely to use powerful Status Moves, use Taunt on the first turn. You can prevent interference with your allies, making it easier not to faint.

Without counteracting, three hits can weaken it to the maximum. Once the weakening is complete, keep using Helping Hand on allied attackers to buff up their attacks.

Note That Status Move Is Invalid After Shielding

Status moves will not work after the raid boss puts a shield around it and negates the negative effects. Once the raid boss gets a protective barrier, you may either try to support allies with Cheer, inflict the enemy further with Taunt or buff up allies with Helping Hand.