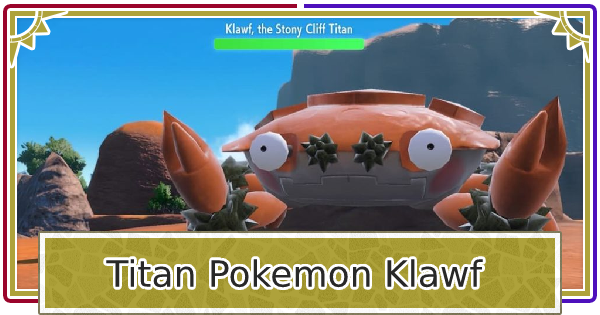 Klawf is a Titan Pokemon in Pokemon Scarlet and Violet (Pokemon SV). Read on to learn more about Klawf's weakness, movesets, map locations, battle tips and how to unlock dash move.

Water And Grass Types Are Recommended

Stony Cliff Titan has five weaknesses: Water, Grass, Fighting, Ground, and Steel. In particular, Water/Grass type Azurill and Skiddo are easy to obtain from the early stages of the battle and can exploit weak points.

Go to the Pokemon Center on Artazon West, just east of the school. You should recover your HP if you fight random Pokemon along the way.

From the Pokemon Center, head west on the road. There is a straight road, so there is no reason to get lost, so head straight to the Titan Pokemon.

As soon as the Stony Cliff Titan climbs the mountain, go up the hill to the right to the Titan Pokemon.

Note That It Is Reinforced When Hp Is Less Than Half

Stony Cliff Titan's Ability lowers his defense and special defense when his HP is less than half, and increases his attack, special attack, and speed. The attacks will be more severe, so try to end the battle by hitting the weak points early.

When the Stony Cliff Titan is defeated, a Dash can be performed by pressing the L stick in the direction of travel. This move will allow you to move faster and make it easier to reach your destination