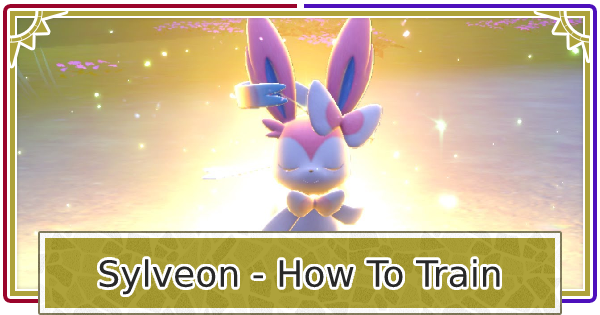 How to train Hidden Ability Sylveon Build for Tera Raid in Pokemon Scarlet and Violet (Pokemon SV). See how to train for the Unrivaled Charizard Tera Raid recommended skills and what to bring.

Sylveon is an attacker who does a lot of damage with Hyper Voice enhanced by Pixilate. It is one of the best Pokemon that has firepower among the Fairy types.

You Can Defeat The Unrivaled Charizard Solo

How To Battle In Solo Mode

How To Battle In Co-op Mode

How To Train Sylveon For Raids

First, catch Sylveon or Eevee. If you want to catch them in the wild, we recommend Sylveon (Tera Type: Fairy), which appears as a wild Terastal in the North Province Area Three. It has been confirmed that you can get Lv 50 and Individual Value of 3V.

Raid Or Hatch If You Want Hidden Ability

If you want to get it with Hidden Ability, catch Sylveon that appears in ★6 Raid directly or hatch an Eevee breed till it has a Hidden Ability and train it. Note that in this case, a Tera Shard is required to change the Tera Type.

Ability Patch can be used to change Ability to Pixilate (pre-evolution: Anticipation). To change Tera Type, you need 50 pieces of the Tera Shard in that type you want to change. Both are rewards of a ★6 Raid. No items are required for individuals with Hidden Ability and Tera Type Fairy.

Modest Mint can be used to turn Nature into Modest. If you don't have one, go to Chansey Supply in Mesagoza or other towns and buy one for $ 2,000. If the original Nature is Modest, there is no need to use Mints.

※Lv 100, With SPD IV at 31, you will have the first hit in the Academy Ace Tournament

Use Items To Increase Effort Value

The fastest way is to use the above items to change its value if you can afford it. Although a total of about 500,000 Poke Dollars is required, it can be changed out in a more time-efficient manner.

By capturing or defeating wild Pokemon, you can earn 1-3 Effort Value. If you let Sylveon hold a Power Item, it can increase the Effort Value gained by 8. Power Item costs only $ 10,000 each and is recommended for those who want to save money.

If you cannot see the image of the place where it appears, click to enlarge the image.

If you clear the 5 or 6 star Tera Raid,you can get Exp. Candy L or Exp Candy XL. Leveling up is the most efficient when training a single Pokemon.

If you do not have enough candies to raise a Pokemon to Lv 100, it is recommended to hunt for Chansey at North Province Area Three until you get enough candies.

Use the Bottle Caps for Hyper Training to raise Individual Value to the highest except for Attack. Hyper Training can be done by talking to the NPC behind the Pokemon Center in Montenevera.

The Attack Move, [Hyper Voice] and the Support Move [Fake Tears] are essential to Sylveon. The other two slots are up to you, you can choose from [Calm Mind], which enhances Sylveon itself, [Draining Kiss], which recovers HP while attacking, and [Hyper Beam], which is helpful for beating Charizard with a single blow.

How To Use Sylveon In Raids

How To Use In Raid

Since [Hyper Voice] is a Move involving Sound, by using the Throat Spray, it will increase the Sp. ATK. The effect will only be used once, but it will be a big difference to your fire power so it is recommended.

Once you have prepared, you want to use [Hyper Voice] and attack. If it will be a long battle, you want to use [Calm Mind] and strengthen yourself or use [Draining Kiss] and heal and adjust your moves considering your opponent.