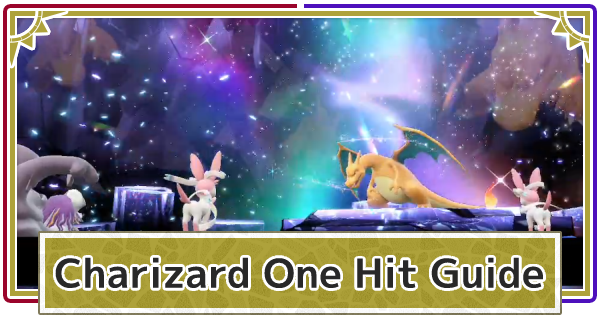 Best Pokemon For Beating 7 Star Charizard With One Hit

Stable In Both Solo and Multi

Sylveon is highly recommended because it can raise its own Sp. Attack with Calm Mind and lower the enemy's Sp. Defense with Fake Tears, making it a complete unit.

▶How To Train Sylveon For Tera Raid

Co-op Mode (Multiplayer) can reduce the time required for a single battle because it is possible to weaken the enemy more efficiently. However, since it is necessary to cooperate with others, it is recommended that you go around with friends.

▼How To Beat Charizard With One Hit In Co-op Mode

How To Solo 7 Star Charizard Raid With One Hit

Steps To Beat With One HIt

If Sylveon is one of the NPC Pokemon, it is likely to fail

If Sylveon is one of the three NPCs, you might cut Charizard's HP too much, and it will put up a shield while you are preparing, which makes it harder for you to make a single blow attack. You should save your game prior to challenging the raid and turn off your game since just by running away will not reset the NPCs.

The first turn, use Calm Mind. Since 7 Star Charizard only uses Special Moves, increase your SP. DEF by using Calm Mind twice. If you only use it once, you have a chance to faint still, but if you use it twice it becomes more stable.

After stacking Calm Mind, hit with Fake Tears three times to lower Charizard's SP. DEF by six levels. Note that you will have to hit repeatedly if it cancels your attacks with its counterattack.

After using Fake Tears, check the Charizard's HP. If the HP is decreased like the picture above, use Hyper Beam, if it is not decreased, you want to use Cheer "Go all out!" first and then use Hyper Beam.

If 2 Of The NPCs Had Fainted, Do Not Use Cheer

There isn't a problem if it is only 1 NPC, but if there are 2 fainted, then it will freeze and you will. not be able to move. It will be a huge time loss, so you want to calculate your timing and use Cheer.

If It Puts Up A Screen, Use Draining Kiss

If the Charizard is to up a Screen, you will not be able to Single Blow. You would want to use Draining Kiss consecutively to break it. Hyper Voice is also strong, but Draining Kiss is more useful for longer battles.

How To Beat Charizard With One Hit In Co-op Mode

Steps To Beat With One Hit

After confirming that Fake Tears has been hit to Charizard, hit Instruct to the Fake Tears Pokemon. Instruct is a move that allows you to hit the same move again. This will reduce Charizard's Sp. Defense by a total of 4 levels.

After confirming that all preparations are done, Sylveon will attack Charizard with the Hyper Beam. If it can hit the target, you can defeat Charizard with a single blow.

How To Respawn Charizard Raid

Change Date To Respawn It

*It may affect the Gameplay, please use at your own risk.

The 7-Star Raid Event will be updated at the same time as the regular Raid when the date is changed. The event will continue to appear until December 5, the end date, no matter how much you change the time on your Switch, so those who want to collect rewards should take advantage of this.