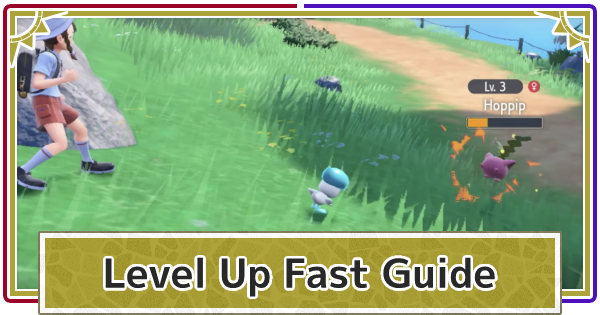 Check out how to level up fast in Pokemon Scarlet & Violet (PokemonSV). Guide includes best locations to level, how to get EXP quick, recommended areas, and more!

How To Level Up Fast?

Fastest Way Is To Do 5 Or 6 Star Raids

After clearing the story, there will be 4 Star or 5 Star Tera Raid that will be unlocked on several regions of the map.

The amount of EXP needed to reach Lvl. 100 can be divided in 4 patterns, at Pattern A, you just need to join ten 6 Star Raids.

※ Let's Go Auto Battle does not give bonus EXP so battle them Normally.

※The Chansey defeated is at Lv44, no EXP Buffs

Defeating many Chansey at North Province Area 3 gives you alot of EXP. You can easily get to this area with Legendary Rides early in the game, making it possible to farm EXP this way so long as you can defeat Chansey. After obtaining 3 badges, you can easily defeat Chansey by capturing a Paldean Tauros.

Chansey is weak at fighting types, further more, it has a very low DEF making Chansey vulnerable to Physical Fighting moves. For quick farming, use a fighting Pokemon that has a high ATK. While it depends on the Pokemon, most of the time, Lvl. 30 is enough to defeat Chansey in one hit.

If You Do Not Have One, Capture A Paldean Tauros

※Around the central west of the map near Porto Marinada.

If you do not have a Pokemon that fits the condition, you can head to Porto Mirinada (around West Province Area 2) and capture Paldean Tauros. Even at its freshly captured state of level 26, it can easily defeat Chansey. At Lvl. 35, it learns the move "Raging Bull" making it faster to EXP farm.

How To Get To Porto Marinada?

※Close to the goal, you can get to Porto Miranada by heading west.

Once you have the Pokemon to defeat Chansey, head to the route above and and head to the North Province (Area 3). Porto Miranda is the start location shown in the map but if you do not know how to get there, check the map in the collapsible section of above.

Upon arriving at North Province Area 3, do a Picnic and prepare a Ham Sandwich to activate Encounter Power: Normal. If you make a mistake in preparing the sandwich, the effect wont trigger so be careful.

How To Make Sandwiches?

How To Obtain Ham Sandwich Ingredients?

After activating Encounter Power: Normal, head to the North Province Area 3 to spot Multiple Chanseys. Use the Pokemon you prepared and defeat the Chansey for EXP Points. If you cannot defeat it in one hit, use ZR to throw the ball from behind so you get one free turn.

※ The defeated Tatsugiri is at Lvl. 50 without any EXP Buffs.

From early game to lvl. 50, you can gain many EXP buy farming Tatsugiri. Below Level 52, the only move that is used by Tatsugiri are water type moves so using Pokemon that has the ability, Water Absorb, will prevent its damage forcing it to use Memento and faint.

At the area between the first Lighthouse and Los Platos, you can capture a Paldean Wooper that has Water Absorb so capture it.There are other abilities that Wooper can have so it is easier to test it by attacking first with a Water Attack or the ability Trace.

Paldean Wooper Evolution & How To Get (Location)

Start at Mesagoza then follow the route above until you reach the place where Tatsugiri spawns. If your Pokemon faints during the trip, go to a Pokemon Center Marked by Pokeballs in the map.

▲So long as the Tatsugiri is at Level 51 and below, you can safely fight.

Use the Pokemon with Water Absorb ability as the main Pokemon such as Paldean Wooper use moves like Tail Whip and wait for Tatsugiri to use Memento. Remember that at 52 and above, Tatsugiri will learn a dragon move so only fight those at Lv. 51 and below. After registering in the Pokedex, you can see the level by pressing ZL button to lock on and check level.

Eat a Sandwich and activate Water and Dragon power. Doing so will increase the experience gained by the Pokemon. Drink Lemonade at Mesagoza to activate it. At the field you can use the 「+」Button to check if there are still effects.

Use Food To Activate EXP Powers

By eating food in cities or villages, you can recieve many effects. One of the effects are Exp. Point Power. This boost the EXP received from a certain type of Pokemon once you defeat it. A cruicial part of EXP Farming so do not forget to eat food.

The Exp gained by Pokemon holding a Lucky Egg increases by x1.5. This can be obtained after gathering 6 Gym Badges and talking to a Gym personel.

With Let's Go, you can easily defeat many Pokemon. making gathering EXP a breeze when fighting a group of Pokemon. The EXP obtained is only 40% of what is gained from Normal Battles.

If You Can Defeat The Pokemon In One Hit, Normal Batter Is Better

If you can defeat the Pokemon on one hit (with Super Effective moves and such) Normal battles would not take much time making it better when farming for EXP. This is especially effective when fighting Pokemon that produces lots of EXP like Chansey

From battling trainers, you can obtain lots of EXP so make sure to battle Trainers you encounter actively.

Collect Pokemon As you Go

Even just by capturing Pokemon, you can gain EXP so if you encounter a Pokemon you don't have, capture it to get EXP.