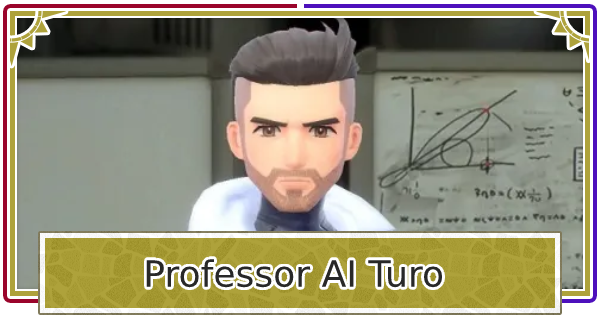 AI Turo is a Pokemon Professor from Pokemon Scarlet and Violet (Pokemon SV). Read on to know more about his Pokemon team lineup, battle tips on how to defeat him and map locations.

Unlock the four doors in Area Zero to enter the Zero Lab.

The event will start when you approach Dr. Turo in Zero Lab. It tells stories about Dr. Turo's secrets, ancient Pokemon, and more.

After reaching the far end of the Zero Lab, insert the Violet Book into the pedestal in the center to begin the battle with Dr. Turo. You can save before plugging in, so be prepared for the challenge.

1st Round Pokemon Lineup And Their Weak Types

2nd Round Pokemon Lineup And Their Weak Types

They use multiple types of Pokemon, making it difficult to have one type to be able to handle them all. Fairy/Ground/Electric can be used to gain an advantage against multiple Pokemon, 2 Pokemon that is being used by the enemy is 4x weak to Ground Type, so be prepared for them if at all possible.

The Second Battle Is An Event Between Miraidons

High Chance Of Winning In The Match Against Miraidon

The battle against Miraidon, which begins after defeating Dr. Turo, is always a winnable event battle. Even if you attack without using Endure,you will continue to hold on with HP 1, and after a certain number of turns, you will automatically activate Terra Burst and win.

The second game, against Miraidon, is designed in such a way that regular Pokemon cannot be used. Choose Miraidon at the bottom of Pokemon to fight.

Any move is fine to use, so if you keep attacking, Penny will ask you to hold back. If Endure is selected at that time, its attack performance is greatly enhanced.

As the turn progresses, the button calls out that the Terastal orb is glowing. From the next turn, Miraidon transforms into Terrastal and fights.

Use Terastal Miraidon's Terra Burst to hit your opponent's weak points and deal massive damage.Thereafter, you can defeat Miraidon by continuing to attack it with terra bursts.