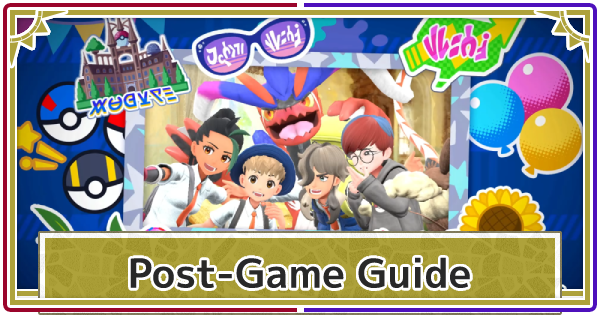 This Post-game guide for Pokemon Scarlet and Violet (Pokemon SV). Includes the fourth storyline, the contents unlocked by completing the game, and things to do after the end.

[The Way Home] Unlocked After Clearing The Main Storylines

The Last Storyline After Completing the 3 Main Storylines

To see the ending of the game, you have to clear "The Way Home," the storyline that proceeds after clearing the three routes. This article summarizes the contents that can be unlocked after the ending.

You Will Receive The Master Ball

After you finish the rematches with Gym Leaders, the Academy Ace Tournament will be held. You are able to challenge the students and teachers that have appeared so far.

After you first complete the Academy Ace Tournament, Jacq will tell you that a powerful Tera Raid has appeared. And the 5 Star Tera Raid Crystal will also appear.

If you complete the 5 Star Raid a certain number of times, you will receive a report from Jacq about the appearance of 6 Star Tera Raid. We have confirmed that it is unlocked after completing the Tera Raid a total of 10 times, including when the 5 Star Tera Raid has not been unlocked. The crystals of the 6-Star Tera Raid are different from those of the 5-Star and lower levels, they are black with electric shocks.

After the ending, your Koraidon/Miraidon will be able to change to Battle Form and join the battle. But note that, they will be out of your team once you use the Legendary Ride in the field.

Unable To Be Sended Into The Boxes

Unlike other Pokemon, Koraidon and Miraidon that have been added to your team in Battle Form cannot be sended into the boxes.

Individual Value And Nature Are Fixed

The Koraidon and Miraidon you caught at Area Zero, their Individual Value and Nature are fixed. It is no need to reroll them.

▶How To Catch Legendary Pokemon

After the ending, you can visit Team Star's base to have rematches with them once a day. Their Pokemon are around Lv60, which is a good way to farm EXP and money as you will get more than 10,000 in prizes.

Judge Function For Individual Value Will Be Unlocked

What To Do After The Ending

Completing the Pokedex is one of the challenges after completing the game. Many Pokemon only can be caught after the ending.

Version-Exclusive Pokemon Can Only Be Obtained By Exchange

There are Pokemon that appear only in one version of the game, and you need to exchange Pokemon from the other version to complete Pokedex.

Paradox Pokemon appear on the way to Area Zero. Those Pokemon that did not appear in the main stroylines will show up, so be sure to catch them.

Paradox Pokemon Are In The Forms Of Different Era

Paradox Pokemon are the Pokemon, which appear for the first time in this game, in the forms of different era. Most of them are really powerful, you should reroll them not only for Pokedex but also for battle.

There are several stakes in the Paldea region. If you pull out all the stakes of the corresponding color and head to the shrine, you can battle each Lesser Legendary Pokemon. Although it is possible to encounter them even if you haven't cleared the game, it is recommended to encounter them after then as their level will be 60.

You can challenge the Academy Ace Tournament again and again even after winning, and the opponents will change after the second round, it is worthy to challenge.

You can catch rare Tera Type Pokemon by challenging Tera Raid Battle, and it is able to get various rewards in addition to Pokemon.

It Is Recommended To Challenge With Friends

You can challenge Tera Raid Battle with your friends. It is more efficient than solo and you may be able to participate in the Tera Raid of the Pokemon you are looking for.