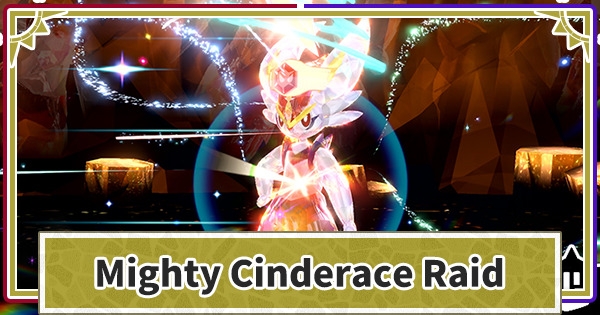 ▶︎How To Beat Cinderace with One Shot

Event Dates & How To Join

The Mighty Cinderace will be an event after the Ending 6★ Raid Unlocks is needed to participate. The other players does not have to qualify to participate so find on the Search Board so you can join a Raid.

How To Unlock A 6 Star Raid

During the period of the Tera Raid Battle, there will be 4★ and 5★ crystals that will have "Gengar" and "Gyarados". Both of them will also be shining icons on your map.

Slowbro is Best for Solo Raid

If you take on this Raid in Solo, Slowbro is recommended. Stack Iron Defense and Nasty Plot to the max and hit with Stored Power repeatedly. And use Slack Off to recover HP as needed. Although it depends on Cinderace's actions, it is relatively stable to complete this raid.

Use Opportunist Espathra Against Cinderace's Bulk Up

The Ability Opportunist allows you to get the defense increased with Cinderace's Bulk Up, and since it cancels out Bulk Up's increased Attack, making it almost non-effective. Use Lumina Crash repeatedly while lowering the opponent's Attack with Feather Dance.

Armarouge is Best for Multi-Play

For Multi-Play Mode, Armarouge with the Ability Flash Fire is recommended. As an Attacker, you can increase the firepower with Calm Mind. As a Support, you can lower the opponent's Sp. Defense with Acid Spray and raise the power of Expanding Force with Psychic Terrain.

* The excess EVs can be placed to whatever you want.

The main role of Toxapex for the Cinderace Raid is to use Acid Spray and Chilling Water to lower the opponent's status. Use Recover when your HP is reduced by a critical hit from Cinderace. You can pick any offensive move as you basically don't use attacks.

How To Beat Mighty Cinderace

Before challenging the Mighty Cinderace, it is recommended to get Raid Power to gather more rewards.

Fixed 1st Turn Will Be Bulk Up

Before you are able to make the first move Cinderace will use Bulk Up and raise its Defense. It will be harder to use Physical Moves to get damage, so it is recommended to use Sp. Attack moves.

Guaranteed To Get A Fixed 6IV

Available Apricorn Balls To Catch It With

You can choose which Apriballs to use to catch Mighty Cinderace. It is the first time you can use something other than Pokeball to catch Cinderace so make your choice wisely.

You Can Get 2nd Cinderace Only By Breeding

You will not get a 2nd Cinderace from a Raid. You must breed it with a Ditto and it does not have a Mightiest Mark, but you will be able to get a normal Scorbunny, Raboot, and Cinderace.

Get The Mightiest Mark

When you capture the Mighty Cinderace, it will have a mark called [Mightiest Mark]. If you use it during Battle, most likely it will have a different scenario than a normal Cinderace.

Guaranteed Ability Patch and Bulk Up On First Catch

Will There Be A Shiny Mighty Cinderace?

There Are No Shiny Cinderace

During an Cinderace Raid, there are no chances of Shiny so you do not have to reroll to get a Shiny Cinderace.

There is a high chance there are no shinies for the Mighty Cinderace Tera Raid. So you do not have to reroll to get a Shiny.

If You Breed, You Can Get A Shiny