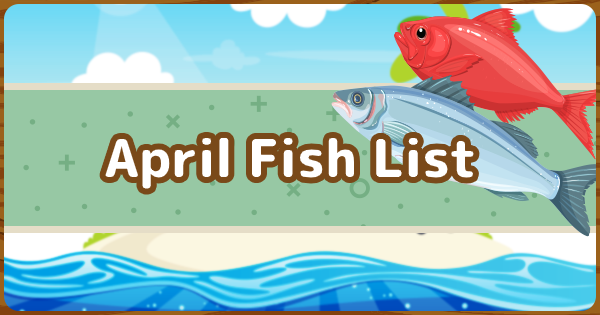 Check out this guide on the fish that appear in April in Animal Crossing: New Horizons Switch (ACNH). Use it to find out when and where fish appear in April!!!

Updated 5/2
Appearing time of some fish have been corrected!

Things You Should Do In April

Check out this guide to find out the most important things to do in April. The guide also features info on bugs and fish you won't be able to get after April!

April - Fish Which Appear in the Northern Hemisphere

April - Fish Which Appear in the Southern Hemisphere

I caught the Cherry Salmon in the pond at the clifftop, not the river for anyone trying to catch it :)

I caught a Char in the southern hemisphere at 3PM. I think the one's written here is false

Caught a gold Trout in a pond on the second floor in the morning.

I caught a char in a pond that was on the 2nd story elevation, not on a clifftop! It was April 30th at 6am in-game, in the Northern Hemisphere.