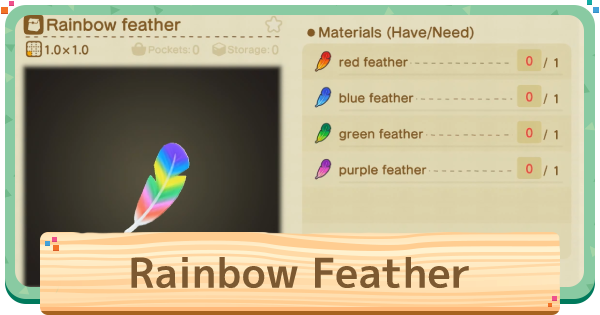 Animal Crossing | ACNH
Rainbow Feather - How To Get

How To Get Rainbow Feathers

Catch With A Net During Festivale

Feathers will only appear on your island on February 15th, when Festivale is held! Rainbow feathers will have a chance to spawn alongside other feathers, though they have a significantly lower chance to appear.

It's possible to craft Rainbow feathers if you can't find them yourself. To do so, you'll need to get one feather of each color!

Rainbow feathers will require one feather of each color to craft. These regular feathers can easily be found on your island, so if you just can't seem to find a Rainbow feather, consider crafting one instead.

Get The Recipe From Pavé

The recipe to craft the Rainbow Feather can be obtained by talking to Pavé for the first time during Festivale!

What To Do When You Can't Find A Rainbow Feather

Enter And Exit A Building

By entering and exiting a build, you'll reset the feathers currently floating around your island. If you can't find Rainbow feathers, it might be worth your while to briefly slip into a villager's house to reset all feathers.

Rainbow feathers can be handed in to Pave in exchange for various Festivale Furniture. Note that after you get 9 Festivale item pieces, you'll need to give Pavé 3 Rainbow feathers to get Festivale Float, the final item! It might be worth saving up 3 feathers in advance for this.

Possible To Get Rainbow Items Too

Giving Pavé a Rainbow feather will reward you with a rainbow-colored Festivale item! It's also possible to change the item's color to rainbow via Customization, but if you'd rather just get an item directly, give it to Pavé instead.

Rainbow feathers can also be used in the process of Customization, allowing you to turn a given Festivale item rainbow colored!

Wear As A Hair Ornament

Finally, if you should feel so inclined, you can actually stick Rainbow feathers in your hair! This will give you an added flair and is perfect for celebrating Festivale!