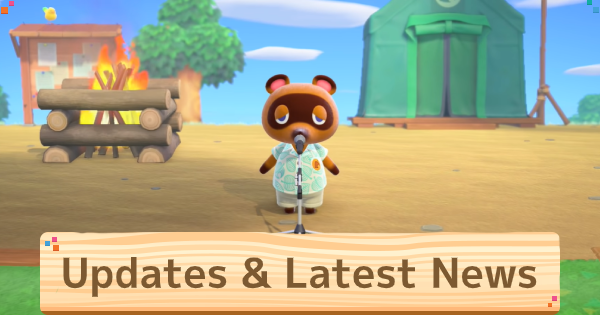 Check out this Animal Crossing: New Horizons Switch (ACNH) guide about news and January Update in the game! Including latest info, gameplay features, and events!

The latest update coming January 28th includes the Festivale event. Here you'll be able to meet Pavé, the host of the event, and get a variety of special limited-time items!

The Winter Update, which includes Toy Day and Turkey Day is going to be live on November 19th. Meet the event hosts Franklin and Jingle on Turkey Day & Toy Day and obtain special event-limited items!

The fall update for Animal Crossing officially released on September 30th, 2020! This update includes Halloween event, new character Jack, pumpkin furniture, halloween costumes, and more! Check the guide below to learn more about what else is in this update!

As part of the 35th Anniversary of the Mario Franchise, special Mario-related items will be coming to Animal Crossing: New Horizon. They're scheduled to launch in March of 2021, so they're quite a ways away, but in the meantime we've put together an article detailing Mario items in previous iterations of the franchise for you to check out below!

Check Out The Items In Detail Here

The second wave of the summer update is coming on July 30th! This update includes Fireworks Shows, Redd's Raffle, and new visitor Luna & her Dream Suite!

Check Out More Info On The August Update Here

There will be Fireworks Shows happening every Sunday during August. You can create your own fireworks by using your Custom Designs.

Get Festive Items At Redd's Raffle

During the Fireworks Shows, Redd will be holding a raffle at the plaza. You can get various festive items by spending your Bells here.

Check Out List Of Redd's Raffle Prizes From Here

A new free summer update has been announced! With this update, players will be able to dive into the ocean to find new sea creatures and meet a new sea otter villager named Pascal.

Did you know that today is International Children's Day? Yes, yes! On this day, we take the time to celebrate the children of the world...and Nook Shopping can help you celebrate with special items available through the end of the month. I hope you'll take a look, hm? pic.twitter.com/al5hiMw83n

"From 10am to 11am on May 22nd (Japan time), Nintendo Switch servers for Animal Crossing New Horizons will be undergoing maintenance. During this maintenance, the game will not be available for play. We respectfully ask for your understanding."

The Japanese Nintendo Support twitter account has announced that there will be a maintenance held on May 22nd from 10am to 11am which will affect Animal Crossing servers only. This is set to last only one hour.

[Announcement]
Bring a bit of island life fun to your day with these #AnimalCrossing: New Horizons themed wallpapers! We hope you will enjoy using them! #ACNH pic.twitter.com/icJCnJQpI3

Nintendo announced the release date and details of Nature day and many other major updates. Update not only include Leif and Nature Day but also museum expansion (art gallery) and other seasonal events! See the guide below for more detail.

A new patch was announced to be coming on April 6th by official Japanese sources. The main contents of the patch are said to be the following bug and balance fixes:

Information about the Bunny Day and other update was revealed at Nintendo Direct Mini on 3/26! Bunny Day event starts from 4/1 don't miss special DIYs and clothes!

If you want to see the Nintendo Direct Mini, click here!

Coinciding with the launch of the game, a free update will be released! Downloading this update will give players access to Bunny Day with Zipper T. Bunny on April 2020.

New 30 seconds commercial of Animal Crossing: New Horizons released from its official Youtube account. Check out the peaceful island life from the video above.

▲Chilling under the palm trees...

Watch The Official Video Below

Get Into Deserted Island Life

During the September 2019 Nintendo Direct, a 5-minute video about island life was launched for Animal Crossing: New Horizons. Here players got a sneak peek of the different gameplay features such as crafting, Resident Services, & more!

During E3 in June 2019, a new trailer for the upcoming Animal Crossing game was released. It reveals an idyllic deserted island life and the official name of "Animal Crossing: New Horizons".

Watch The Official Video Below

In a trailer launched in September 13, 2018, Nintendo announced that a new Animal Crossing Game will be coming to the Switch in 2019! This announcement coincides with Isabelle being launched as a new contender in Super Smash Bros. Ultimate.