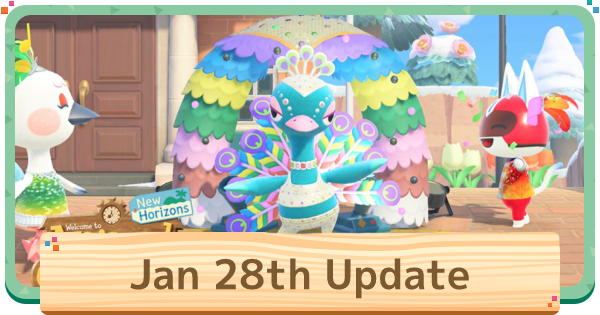 ※ Note that the update is likely to release on Jan 28th at 10am Japan time, which is 8pm EST on the 27th. It is not clear if the update will be available this early for players outside of Japan, however!!!

Version 1.7 of the game is set to go live on January 28th, 2021. The Festivale event, which takes place on February 15th, as well as other seasonal items will go live along with this patch.

[Announcement]
Pave brings the Festivale event to your island in the next free update for #AnimalCrossing: New Horizons, launching on 1/28! #ACNH pic.twitter.com/8Tr4cW62H0

Check out the official trailer for the January patch in the above tweet!

February 15th will bring with it the exciting Festivale event. Here you'll be tasked with collecting feathers for Pavé, the elaborately dressed Peacock. Perhaps you'll be able to get exclusive items by taking part in these festivities?

At the beginning of February, you'll be able to purchase special Festivale furniture and Festivale clothings from the Nook's Cranny and Able Sisters shops. Try to get them all while you're able to!

A new set of reactions will also be available for purchase starting February 1st. The "Viva Festivale" set will only be available from Feb 1st to 15th at Nook's Cranny. Make sure you pick these up before the event!

Starting February 1st, you'll also be able to obtain special items and clothing related to the Japanese tradition of Setsubun. You'll get special beans, which are thrown at people wearing an Oni (a demon-like creature), in an effort to remove bad spirits and bring fortune to the household. If you're not familiar with this event, why not give it a try?

Other seasonal limited items are available for purchasing at Nook Shopping. These include Valentine's Day chocolate and bouquets, as well as items from a variety of other world events!

Shake off the cold winter weather with some complementary Maracas - all players will receive these as a thank you for updating the game. Use them to enliven your Festivale celebrations!

Next Update Is In March

Animal Crossing New Horizon's next free update is schedule to come out in March! This is going to include some sort of a collaboration with the Mario franchise, so it's likely we'll be getting Mario-related items (as was the case in past games!)

Mario Items From Past AC Games

The only remaining major event in the game is Festivale, to be added in the January 28th update. There may be other events added in the future, however!

During last year's 35th Anniversary Mario event, a collaboration was announced between ACNH and the Mario franchise! The actual update will be coming in March, and we're expecting Mario-related items to be added!

How To Update Your Game

Press The "+" Button On The Home Screen

Your game will automatically update as long as you're connected to the internet, though it may take a while before the download actually starts. If you want to manually check for game updates, select ACNH on your Switch's home screen and press the "+" button. Then go to Software Updates and download it manually.

If the game doesn't seem to be updating, it can be worth it to just turn your Switch device off and on. Hold the power button and select restart to do this.

If you don't currently have an internet connection, it's actually possible to receive the latest software from another Switch device that has it already installed. Select the bottom option in the Software Update tab to do this!