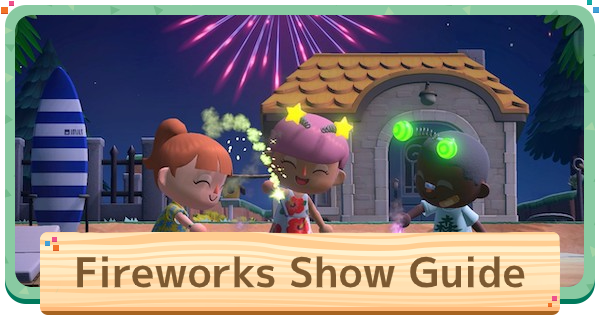 Check out this guide on the Fireworks Show in Animal Crossing New Horizons (ACNH). Includes info on the fireworks festival in past games, speculation, event time, & more!

Check Out All Other Events Here

The Fireworks Festival In New Leaf

The following contains information about New Leaf. This page will be updated when the Fireworks update goes live in New Horizons.

Held At 7 PM Every Sunday In August

In AC: New Leaf, the Fireworks Festival was a special event held during the month of August. It was held from 7pm to midnight on every Sunday of the month. Players could feast their eyes on a spectacular display of in-game fireworks.

Got Accessories From Isabelle

▲ Isabelle giving the character a special item for the fireworks show

By talking to Isabelle on the day of the fireworks festival, you were able to get 1 of 4 possible random accessories.

During this event, Redd would set up a street stall where he sold Cookies for 500 bells. This cookie also served as a sort of raffle, and after eating it you would get a random prize (or, unfortunately, a dud ticket), which you could exchange for special items.

Fireworks Sold At The Shop

For a limited time only, players could buy fireworks-related items at Nookling Junction (the shop in New Leaf). These items were usable in other seasons as well, so it was possible to save them up. Perhaps the same will be possible in New Horizons?

The following contains information about New Leaf. This page will be updated when the Fireworks update goes live in New Horizons.

Nookling Junction sells three types of fireworks. If you buy them, you'll be able to use them at any time of the year!

Held At Different Times For Each Hemisphere?

▲ Note the fireworks in the background!

Given the new introduction of Hemispheres to the AC franchise, it's likely that the timing for the Fireworks Festival will also vary along with the local seasons. However, since this upcoming patch has been billed as a "summer" update, it's also possible that the festival will uniformly take place in August for everyone.

A Similar Event To Previous Games Is Likely

It seems there's a high chance that New Horizons will have a similar event, where you'll be able to take part in a raffle and get items from various characters.

Scallops sell for 300 bells
And sea stars sell for 500